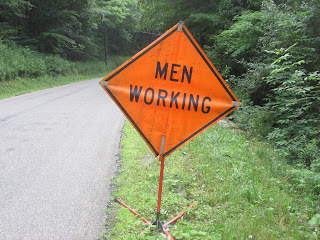 My friend with his stone hoover, along with various other assorted machinery, have moved further up the lane, probably engaged in some flood-prevention ditch-dredging. But I'm surprised you're still allowed to say "Men Working". Even if they did look like men to me.  Do they still have those "Men at Work" signs in Britain? Or do they now say "Persons at Work"?  It reminds me of a friend, years ago, who offered to "man" a stall at a very PC charity fair and was soundly told off. She was a woman, actually. Here they do have a lot of women manning, oops, sorry, personning, the flags that tell you to stop or go before the roadworks, so a woman might well be employed to person a stone hoover. As I write, there's probably some bureaucrat in the Highways department being paid to think that one through.
Posted by Alenka at 8:43 PM