The town sister-in-law and I arrived at had an interesting name,  Moncks Corner. We were in South Carolina  on our way north from Florida and were looking for somewhere to stay.  “Moncks” was spelt wrong of course but had it been Olde England instead of the Old South,  we’d have suspected  there might be some monastic connection.
This wasn’t exactly Catholic Central but the evangelical South, dotted with churches and chapels of umpteen denominations.  Signs like  “Get Right With God or Get Left Behind”,  vied with others advertising  “Cat Fish, Frog Legs, Raccoons, Rabbits” and the “Hell Hole Swamp Festival”.   But life often takes a funny turn and as we googled Moncks Corner,  we discovered there was, indeed, a monastery.  It was called Mepkin Abbey, a monastery of the Order of Cistercians of the Strict Observance, or Trappists. We set off early the next morning to find it.
We passed old crumbling gateposts,

one tumbled down and gathering weeds,  belonging, perhaps, to  some abandoned mansion and took country lanes with suggestive names 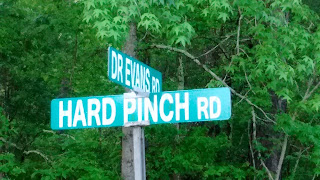 Beyond the entrance to Mepkin Abbey we drove along under a spreading  canopy of gorgeous live oaks,  favourite trees of the south, 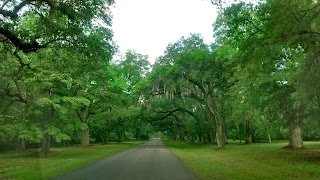 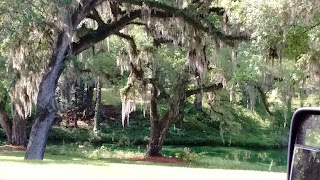 It looked like the approach to a grand plantation, which indeed it once was.  It started life in the 18th century as a rice plantation and in 1936 was bought by Time magazine publisher Henry Luce and his wife Clare Boothe Luce. 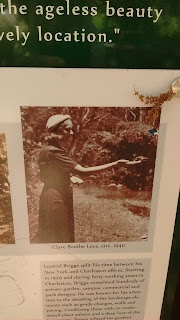 She led a high profile life as an author,  playwright,  war reporter, Republican politician, fierce anti-Communist and first American woman to become a top diplomat - as  Ambassador to Italy.   In 1946, after the loss of her only child in a car crash, she converted to Catholicism.  Known for her sharp wit, she’s one of a few people credited with coining the phrase, “No good deed goes unpunished,”  but despite that,   she and her husband donated a major part of the Mepkin Plantation to the Trappist monks of Gethsemani  Abbey in Kentucky, to found a new abbey. Both the Luces are buried there.
As always, we didn’t have much time to explore. In the early morning the monastery grounds were tranquil, here an azalea in bloom, 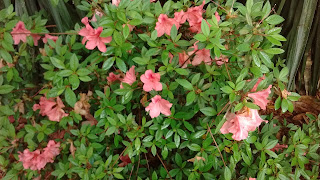 The whole had been designed by a noted landscape architect, Loutrel  Briggs,  when the Luces contemplated building  a house here. As we drove further,  rolling vistas opened out, interspersed with lifesize  modern wooden sculptures:  Christ taken down from the cross; the flight into Egypt. 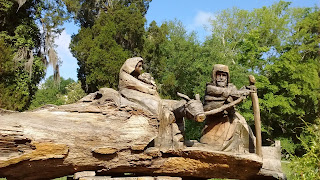 Some slithery visitors basked in the sun 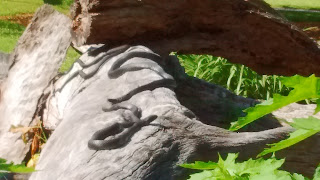 The grounds dropped away to a spectacular view over the wide  Cooper River. 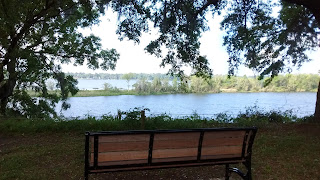 Families setting up a picnic arrived in their cars and started spreading out rugs in the shade, the children hugely  excited at seeing the snakes.
In the gift shop, a celebrity was visiting, 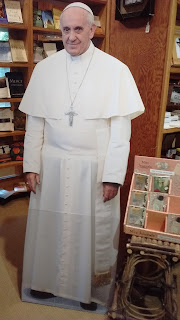 ready for the paparazzi 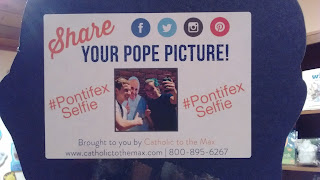 The monks used to make a living raising chickens and selling the eggs but after running into complaints from animal rights activists (which many supporters considered unjustified),  they turned to the less risky pursuit of growing mushrooms.  I bought some dried oyster and shiitake mushrooms plus a recipe book called “Food for Thought” by the monastery cook, Father Joseph Tedesco, as a present for hubby, who’s the best chef in our household.  Enticing mushroom recipes figured prominently, though the Mushrooms and Cabbage in Chili Sauce might be an acquired taste.
The girl running the shop told us there were now  thirteen monks, the youngest aged 32 but many of the others a lot older.  Would they keep going?  “Of course – they’ll always keep going,”  she said, “and anyway they can’t have too many here.  It was built for a small number”. The  austere, modern church was nothing like an ancient abbey but Mepkin had all that calmness that somehow seems to envelop monasteries the world over. We could have stayed there forever but we had to get back on the road. 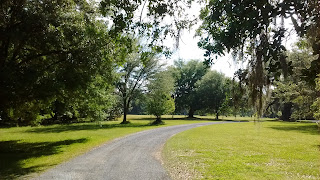