Off to the Ballgame

My American husband had been saying it for a long time, “You really should go to a baseball game”.
“But”, I said, “I have been to a baseball game.”  On my first visit to America, way back when,  a friend dragged me to see the Los Angeles Dodgers. I fell asleep.
Hubby was insistent. I’d frequently said that, while I’m not the world’s biggest cricket fan, I do like the  idea of traditional cricket on an English village green.

“So”, he said, “Let’s find the equivalent. A local game, not too commercialised,  where we can get close to the action.”
So off we went to the ballgame. 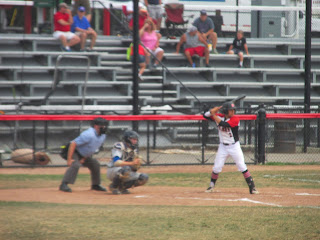 There is no equivalent of an English village green in our western New York small town. Instead we headed for the town stadium, with a rudimentary  grandstand at one end and an uninterrupted view over the foothills of the Allegheny Mountains at the other. 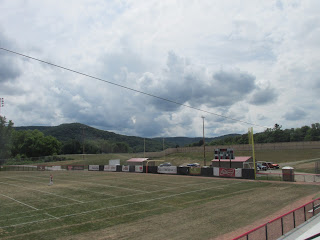 We paid five dollars for two tickets and found ourselves a vantage point. 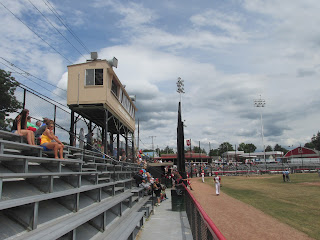 The local team are called the Oilers, from the town’s oil-producing origins and were big in the 1950s. After a gap, they were recently revived  by a community-spirited lawyer, who’d gone to the local high school and Franciscan university and wanted to encourage college students with professional aspirations to come and spend the summer playing baseball,  getting plenty of practice and possibly attracting the attention of a talent scout.

The Oilers were playing the Dodgers – not the LA ones but a team from the next county.  I’ m not going to pretend I entirely understand the rules of baseball, although there are some similarities to cricket with a bowler ( sorry, pitcher) and batsman ( sorry, batter)  and innings and runs. The batters run from one base to the next  in a square – or “diamond”. If they do it all in one go, it’s a “home run”, though, as they are constantly caught out, this doesn’t happen too often.
And a bit like cricket, baseball is swathed in nostalgia and dreams of a golden age,   a “pastoral” game, according to hubby. Having said that,  it’s a very American sport – though it’s hugely popular in Japan. 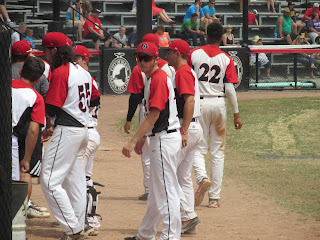 Some of the Oilers,  who, I was disappointed to see,  were wearing long  white trousers rather than the traditional knickerbockers,  came from as far away as Florida – they were probably enjoying a slightly cooler summer.  In a nice touch, one player from Rhode Island had a grandfather who’d coincidentally pitched for the Oilers in the good old days. There was a stand selling drinks and merchandise and while it wasn’t exactly commercialised,  the tannoy intermittently boomed out plugs for local businesses – the  owner’s law firm,  a dental practice promising  “that hometown smile”,  Primo Limo  and its “professionally attired chauffeurs”.
The small crowd clapped and cheered politely,  not unlike a village cricket crowd, though with  occasional transatlantic exuberance,    “C’mon Oilers, let’s go!”, shrieked a woman beside me,  “I’m not having a very interesting day!” 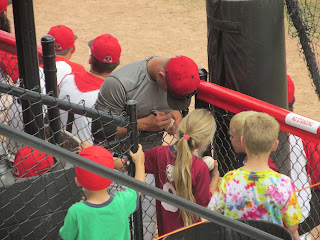 As teams switched – and they frequently did – from fielding to batting,  kids ran up for autographs. Our town is proud of the Oilers. Until the very last innings, I couldn’t understand why. Then I did.
With the teams level at 2-2,  our lads suddenly gained momentum.  In a moment of glorious inspiration, the batter hit the ball right out of the ground, the Oilers got a home run and finally won 4-2. 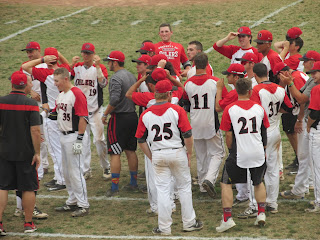 The crowd erupted. I didn’t quite grasp what had happened but I joined them. I’m glad we stayed till the end. And I didn’t fall asleep once.
Posted by Alenka at 2:23 PM