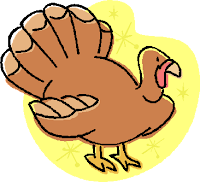 It sounded really good on paper. It called itself an "apartment hotel". The publicity talked about "the elegant grandeur of the Gilded Age". It promised "every creature comfort and amenity" in a "setting more opulent than most homes". Well I  don't know what your home looks like but don't go being snide about mine. Some people might be impressed by what turned out to be a cross between a barn, a garret and a jungle gym but I am not among those people. First of all, we had to drag our luggage up a steep staircase with a sort of 1970s  crimson shagpile that had seen better days. A sign asked us to take our shoes off to preserve the precious carpets. Then there was the upstairs landing: 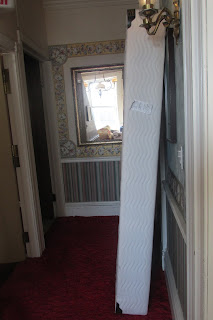 With a couple of large mattresses leaning against the wall and a sofa that seemed to be in use as a store room. 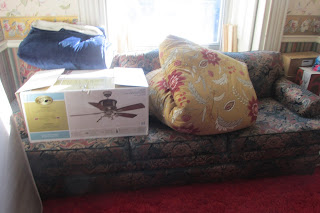 Hubby saw the "suite" (sic) first. "It's 'er, quaint," he muttered, hoping to soften the blow.  The downstairs had the only bathroom, a kitchen area and a small living room space. But to get up to the beds, you had to scale another steep staircase, uncarpeted this time and with narrow treads and a low barrier at the top that someone could easily topple over. We didn't fancy risking that in the middle of the night, especially as the upstairs light switch for the stairs was way over at the other side of the (for want of a better word) sleeping platform and right down by the floor. 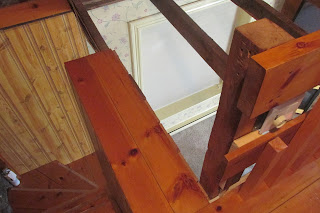 The sleeping platform was fenced in by some rough posts with rough, sharp-edged tops, again with a gap some small child could easily fall through. I think the structure at bottom right below was meant to be a table - but place an object, or person too near the far edge and it might just go toppling down to the depths (and possibly bounce off someone downstairs.)  The publicity for the suites suggested people could role play their fantasies. Well if your fantasy happens to be taking part in the tragic aftermath of the first ascent of the Matterhorn (look it up) you might quite enjoy yourself. 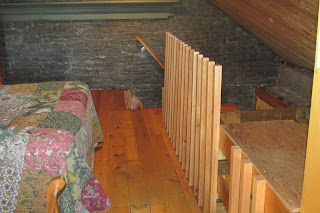 Tightrope walking, anyone? Heaven help you if you were a sleepwalker, though you would probably never get the chance, due to a noisy air-conditioning unit thoughtfully placed in the upstairs window to keep you awake. 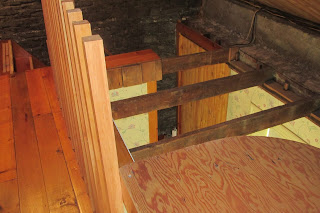 I searched for a bedside light.  There was an ancient one in the corner by the smaller bed. If you wanted to sleep in the larger bed, you had to stretch the cord over the smaller one and it would just reach but with the not indistinct possibility that anyone sleeping in the smaller bed might be strangled. Then I found a switch in the wall by the larger bed and when I flicked it, something behind a flimsy panel at the back of the bed lit up eerily. I slid back the panel. If this wasn't Canada, I'd say it could have been a priest hole. Perhaps it was some kind of historic hiding place dating back to the war of 1812..? 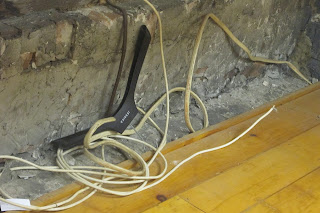 There were cans of paint, some abandoned electronics and - ah yes! A clothes rail and hangers! Wow, it was a fitted wardrobe! 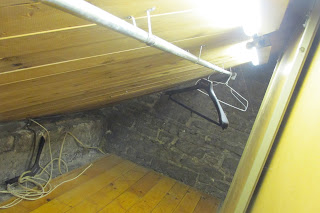 Here's some more of the elegant wiring in the "suite" plus a sneak peek close-up of the uber-hip bare, unfinished walls. 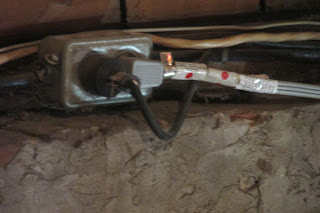 And here's more of the opulent decor - a hole in the wall stuffed with something that looked like underwear.. 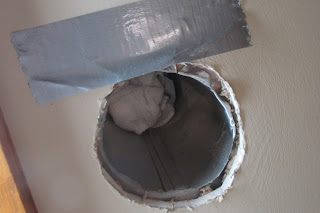 Going back downstairs - where, I will grant them, there was a carpet, I trod on something sharp. Ouch! A tack! And another one! Don't tell but I put my shoes back on.  Plus the window blinds needed a degree in rocket science to work and there were nails stuck in the walls.
There was no one around and our phones didn't work in Canada. The next morning, I stormed into the Brockville tourist office and also emailed both them and the Chamber of Commerce. Oh yes and the owner got a nice letter too. Needless to say, we have not, so far, heard a dickie-bird back from any of them. When we got home, there was an email from the owner, asking us for some reviews with lots of stars to boost his ratings. I was more than happy to comply with his wish, minus the stars. I have to say, I've stayed in some weird places in my life but then I didn't expect much from them.  Nothing, as hubby put it, presented quite such a yawning chasm between hype and reality as this. Did I mention that the establishment was called the "Noble Suites"?  And it cost nearly 200 Canadian dollars (plus tax) for a night? "Golly", I said to hubby, "I wish I had that sort of nerve!"
Posted by Alenka at 7:50 PM