Many people here in Venice, Florida were sad to hear the news that the Greatest Show on Earth is over.  Or almost over. 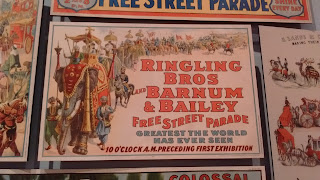 After nearly 150 years, one of the most iconic of American  attractions, the Ringling Brothers and Barnum and Bailey Circus has announced it will give its farewell performance in May.
There are other circuses still going but it seems that kids nowadays prefer smartphones to the smell of sawdust. Computer games provide more spectacular thrills and spills than the Big Top.  I think the last time I went to a circus was on my first ever visit to the United States in the 1970s, when friends took me to a five-ring circus – yes, you had to swivel your head around at lightning speed to catch five acts going on simultaneously. At that time, two rival circuses were both advertising on prime time TV, both claiming to surpass the other in  extravaganza.   Circuses were that important.
Then of course there's the animal rights movement – Ringling Brothers strongly denied allegations of cruelty to their performing elephants and successfully sued for damages but in the end decided, for the sake of peace and quiet, to pension them off to a sanctuary.  Ironically it was the act that apparently appealed most to children. Audience numbers dropped off after that. 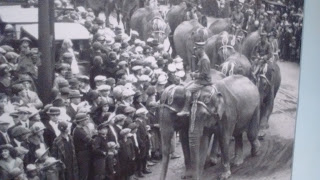 Far from being outlets for awe and wonder, traditional circuses these days  seem, not just musty and old-fashioned but slightly shady. Notice what a bad press clowns have got recently – you’re more likely to associate them with Halloween and horror films than innocent slapstick comedy.
I’ve found myself picking up on all this because Venice was once the Ringling Brothers Circus winter home.  The old practice arena was only pulled down a couple of years ago. There’s a bridge called the “Circus Bridge” and a circus camp on the outskirts of town where kids can learn how to wrangle with the flying trapeze, though whenever I've driven past, its been deserted.
Farther up the coast in Sarasota,  St Martha’s church is America’s “National Circus Church”,  and known locally as the “church the circus built”.   The priest would bless the humans and animals as they returned up north.  Wheels from old circus wagons decorate the church walls and yes, our friend the stuffed lion (see below) has pride of place in the parish hall. When St Martha’s needed money for a new building, legendary circus artistes  like clown Emmett Kelly and the Wallenda family of tightrope walkers held benefits in the grounds to raise funds.
Then there's the Ringling family (on which more later), who donated their Sarasota mansion and land for a circus museum, which we visited a few days ago - here's one of the ornate old wagons - 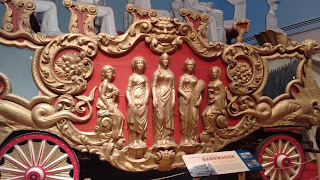 and art gallery.  Also on display is an extraordinary miniature circus, said to be the size of an (American) football field. It has everything, from the elephants emerging from the circus train 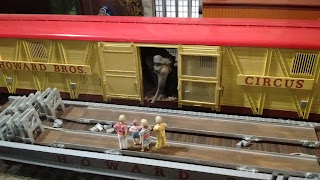 the animals going to the Big Top 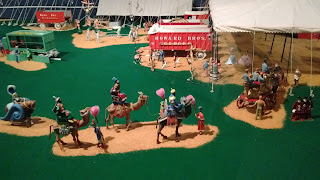 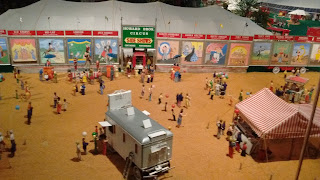 the public queuing up 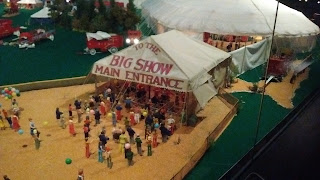 to see the action 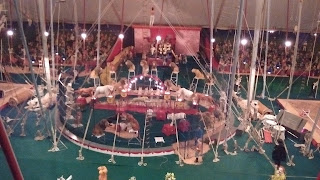 even authentic cars in the car park. 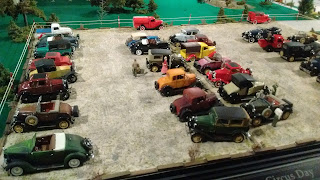 Ghostly circus music played and it all brought a lump to my throat.
And back here  in Venice, there’s a disused railway station, 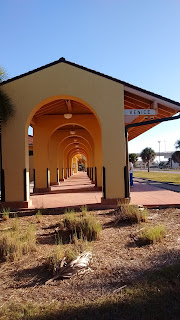 now a museum, with a swashbuckling statue of Gunther Gebel-Williams, Ringling Brothers’  most famous lion-tamer. 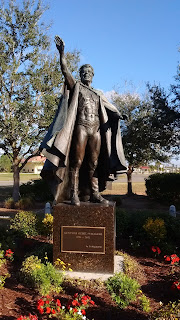 He was said to have entertained  millions of people in more than 12,000 consecutive performances.  He died in 2001, aged only 66 -  miraculously of natural causes.  The statue has a plaque noting his philosophy, that human beings and animals should “work, live and thrive together in harmony”.  The lions’ comments weren’t recorded.

“He was the greatest wild animal trainer who ever lived”, sighed the museum volunteer wistfully, when we were there on a previous visit.  In a converted railway caboose (guards' van) 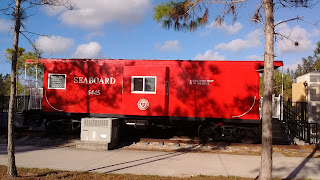 he showed us dusty cases full of circus memorabilia, like miniature model wagons carrying  exotic animals, pulled by elephants in red coats. And he reminded us that the very railway station we were standing in used to welcome the circus train down for the winter.
Political correctness aside, I can’t help feeling a little nostalgic. These days, kids probably look at Gunther’s statue and ask, “What’s a lion tamer?”
Posted by Alenka at 4:07 PM