Of Pumpkins and other Hazardous Produce

A typical roadside sight around our way. 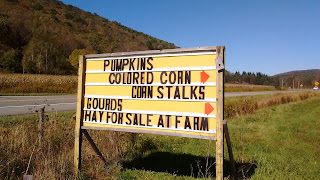 The invasion of the Golden Globes, these being some of the best. 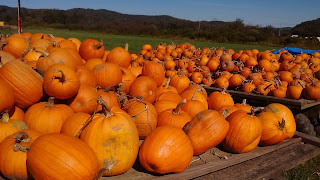 But then again, there's not that much difference between one pumpkin and another and I often wonder where the unsold ones go. Incidentally there was once a great Pumpkin Heist hereabouts. Someone crept by at night and stole his neighbour's pumpkins. There might be better ways to use your time. Police are also apparently deployed in this season to watch out for people hurling them off bridges onto cars.
The coloured gourds are pretty too, if you feel like arranging them in a display. 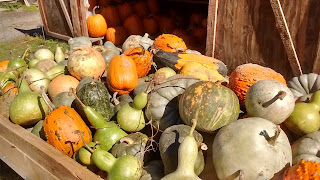 Meanwhile the farmers' market has some less hazardous produce, unless you don't like hot peppers. Though that squash could probably pull a punch. 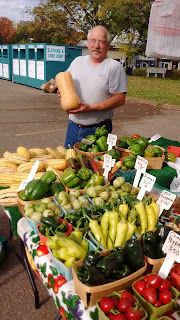 The round red jobs are not tomatoes but ferociously hot cherry peppers. Appearances are deceptive. It all looks like a jeweller's shop display doesn't it? 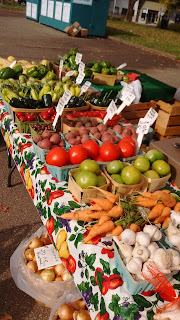 There's talk in town of a permanent site for the farmers' market. Year-round perhaps. I wonder what they can sell in the winter?
Incidentally, while on the subject of hazardous produce,  this summer they seem to have been selling pumpkin pies again. Evidently someone got rid of, or circumvented the  rule that they might be a health hazard because they use eggs or some such. A bit like those British nanny state regulations about the Women's Institute selling jam. Yes, pumpkin pies and jam, among the leading causes of fatalities on both sides of the pond.
Posted by Alenka at 7:49 AM