Autumn in the Jungle

After my absence for a while, things are, how shall I say it, a little overgrown. 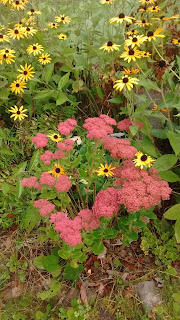 But that's not a bad thing in autumn when the unkempt look works with all the fallen leaves that seem to get into everything. There was, apparently quite a heatwave while we were away - just as I predicted. An iffy summer and as soon as we leave, summer comes with a vengeance. Wouldn't you know. But some of the geraniums are still holding their own. 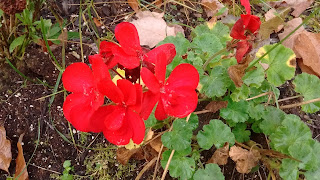 And there's one last remaining daisy putting on a brave show. 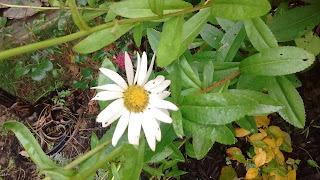 It must have been a little damp though 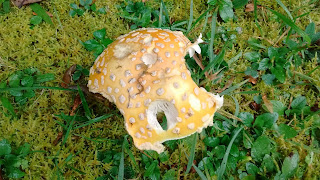 To produce a couple of largish mushrooms - a meal for someone, evidently. 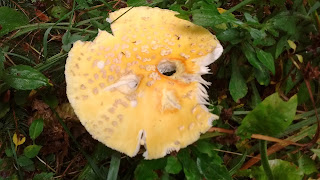 And the bird bath from above is quite artistic. 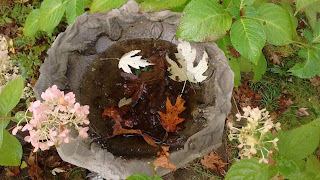 Sadly, for the two most interesting sights, I didn't have my phone to hand, let alone the camera. A handsome red fox came exploring the last remaining tomatoes. Unlike London, they are pretty rare around here and this was a gorgeous, burnished gold, bushy-tailed specimen, fitting in perfectly with the autumn colours. Well if they eat grapes, according to Aesop, I suppose they might like tomatoes. I fear for the chipmunk family though - I haven't seen any of them since we got back.  I hope that's just a coincidence. And today a cheeky raccoon appeared to case the joint. He sat up on the grass by the flower bed sniffing the air and then lumbered off, fat and well-fed. We only turn our backs for a minute and it's a safari park here.
Posted by Alenka at 8:20 PM