We were in Florida and on the look-out for manatees, also - and aptly - named sea cows. I'd only seen one in an aquarium before. During the winter they gather in warm waters, particularly around power stations, so it's a good time to see them. Unfortunately we were too early for that but at least the Homohassa Springs Wildlife Park (trying saying that in a hurry) promised some semi-tame ones that were there year round. It proved to be an interesting place for all sorts of reasons. For a start, guess what this is. 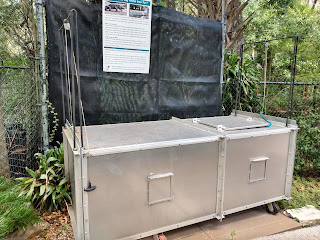 Yes, it's an alligator tank. First catch your alligator then make sure the lid is very firmly shut. Here's one that seemed to have got away. 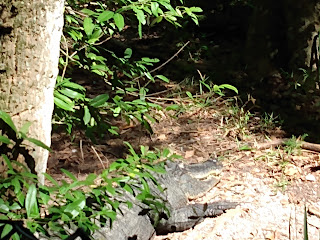 There were a lot of birds in the park, some permanent residents, some what the staff called "freeloaders". Not sure where these vultures fitted into the picture. 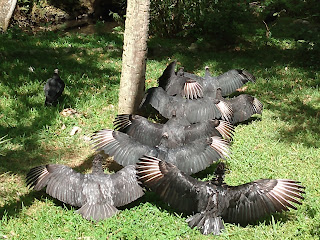 I doubt the flamingos were wild. No one I know has ever seen a flamingo in the wild in Florida - or at least not in our part of Florida. 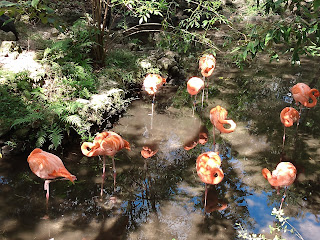 Funny then that they're such a symbol of the Sunshine State - art, furniture, garden ornaments, shower curtains  postcards, beach towels, fridge magnets, knick-knacks, all kinds of kitsch - you name it and it's got a flamingo on it.  A street near us is called Flamingo Drive. But, probably finding all the celebrity status a bit naff, the real flamingoes have decamped to goodness knows where.
Time to find some more appropriate symbols - poodles, golf carts,  estate agents, Burmese pythons, I don't know. Anything but flamingoes.  Though vultures might do. 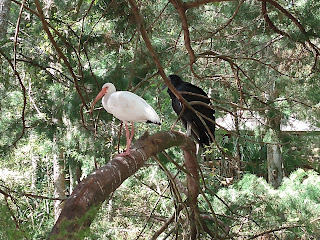 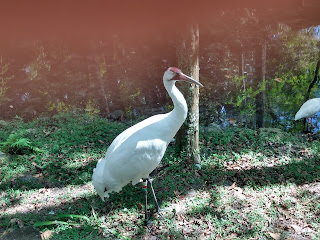 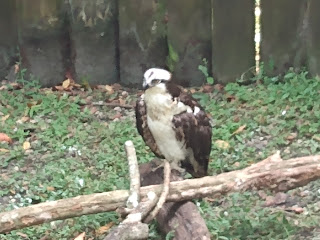 There are a few bald eagles too, this one appropriately saluting the flag. 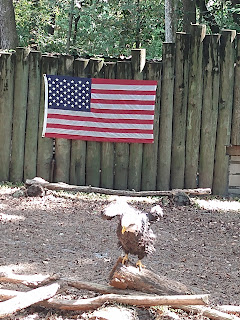 And here's an actual Florida panther, snoring under shelter. Someone we know had one jump over his garden fence just a few miles from us. People are passionate about saving them but perhaps it's a mixed blessing. Especially if you have poodles. 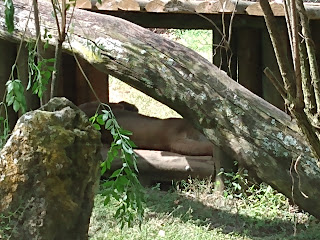 The wildlife park is meant for Florida wildlife only but there's one exception. 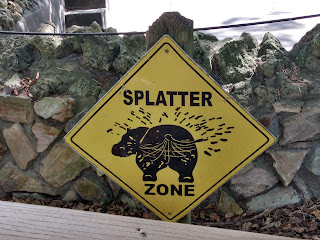 Though fortunately perhaps, that's all we saw of the hippo. Evidently he wasn't in the mood.  The park used to house a business supplying animal actors for films. When it became a wildlife refuge,  local residents petitioned the governor to keep the hippo, named Lu, so he was given honorary Florida citizenship. He's now 60 and the oldest hippo in the Americas.
And finally here were the manatees. 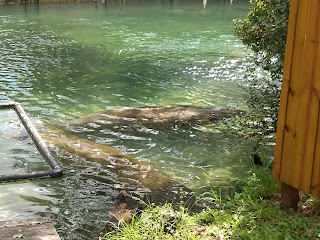 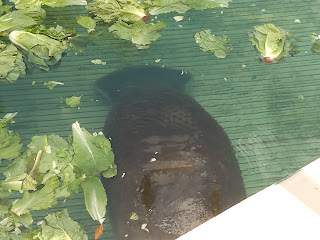 Unfortunately they were a little camera shy too.
And that wasn't all. As we trundled back to the park entrance in our special train through the jungle, 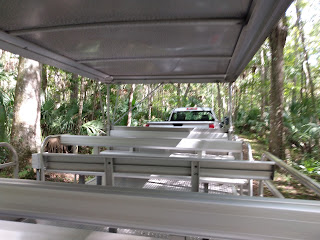 There was something blocking the road. 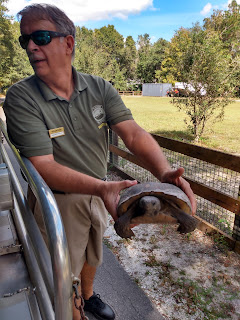 A gopher tortoise no less. 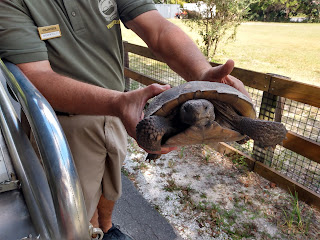 These like to burrow. Sometimes they burrow under people's houses, which is not a good idea. But disturb them at your peril.  The following from the Florida Fish and Wildlife Conservation Commission:
Gopher tortoises and their burrows are protected by state law, and a gopher tortoise relocation permit must be obtained from FWC before disturbing burrows and conducting construction activities (Chapter 68A - 27.003, FL Administrative Code). A disturbance includes any type of work within 25 feet of a gopher tortoise burrow. For additional guidance on activities that do not require a permit, refer to the Gopher Tortoise Enforcement Policy.