As we left Richmond I had a yen to drive along the south side of the James River in the hope of seeing some interesting historical sites but at first it proved a little disappointing - a lot of industrial stuff, then a few swanky but modern country houses set in rolling acres and you couldn't see the river at all. It was well out of our way, so we were going to turn round and head south again, when we saw a sign for a place called Claremont. "Let's just take a look at Claremont", I suggested. At least it might be somewhere where we could see the river. The country lane seemed endless until finally we reached a little settlement. The houses were old, wooden and mostly seen-better-days shabby, although there were hints of more swanky estates hidden behind intimidating gates. We saw a sign for a beach, went over a roundabout, got lost, went back to the roundabout, tried another road and finally, there it was.  The James River. And talk about interesting historical sites... 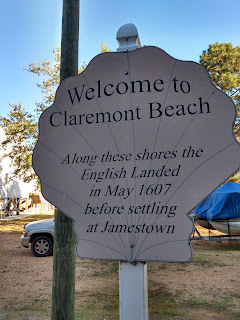 Wow - how about that, as hubby would say. (The British-style roundabout should have given us a clue. No doubt those early arrivals stopped to build it before decamping to Jamestown, or rather what would become Jamestown, the first permanent English settlement on these shores, on the other side of the river.) Well in America that's about as historical as you get - unless you count St Augustine in Florida but that was the Spanish.  We savoured the moment, wondering how the would-be colonists liked the place. Evidently not a lot.

We couldn't see much of a beach.  Unlike a lot of places where you have to fight to get a water view, only a handful of houses lined the river. There were a couple of boats and a gate with a sign warning that access was strictly for the house-owners. Slightly incongruous under the circumstances but that's what they paid for, I suppose. 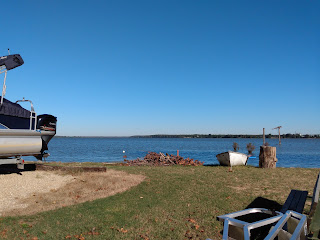 But the river looked blue, wide and pretty, Apparently the area suffered badly from a hurricane a few years ago. But it was down on its luck way before then. Back in the 19th century it had been a bustling railway terminus but then the company changed it's mind about the line and poor Claremont was left in the lurch. Sleepy backwater it may be these days but it will always have its history.
to be continued.
Posted by Alenka at 9:54 PM