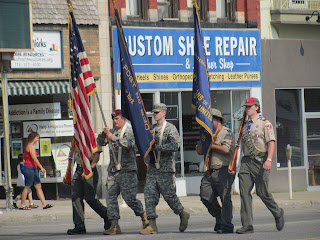 Memorial Day, the last Monday in May, is for honouring those in the armed forces  who died for their country,  a day for taking flowers and miniature American  flags to decorate cemetery graves, a day which marks the start of summer, after which, in the past, well-bred American ladies could venture out in white shoes.

Last year, I pointed out to hubby that I’d never been to a Memorial Day parade. He had always insisted that, when he was a boy – admittedly in a much larger city than Olean,  the Memorial Day parade was unmissable. He made it sound like Trooping the Colour with tanks and big guns thrown in and thousands of people standing six-deep, jostling for a view.
So, appetite whetted, I said I’d go with him to the Olean parade on Union Street.    There was also, we were confidently informed, going to be a fly-past. The weather was violently hot and humid. Not like this year at all. I dug out some white sandals and off we went. 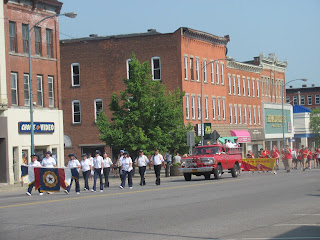 Well, first of  all, the  people on the pavement  weren’t exactly six deep.  More like one deep, with gaps. Definitely no jostling.   And although the parade started promisingly, with some local colour in the shape of a bunch of hairy bikers on their Harley Davidsons, Stars and Stripes flying out behind, things rather petered out after that.  The High School band did its best with what could have been “Yankee Doodle”, followed by the boy scouts, not quite in step and assorted little kids tottering on tinsel-decorated bicycles.  A dog trotted along, sporting a red T-shirt, a toddler in a miniature police car wove in and out, getting in the way,  there were a couple of fire engines and a vintage tractor and that seemed to be it. 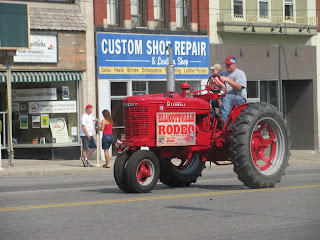 “This used to last forty-five minutes in the old days!” sniffed a disgruntled older lady, “The town’s too cheap to pay for it. Blame the unions, I say”.
There was still the fly-past to come and we craned our necks and squinted skywards, listening for the roar. Sure enough, along came a lone military transport plane that waggled its wings and was off again into the distance. The Red Arrows it wasn’t.
But then I got to thinking. At least some people had showed up in the heat and a fair proportion brought their children. 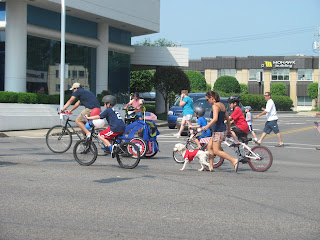 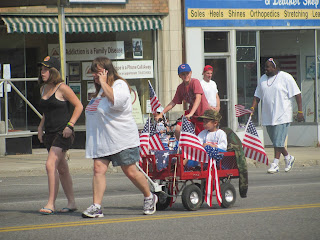 And after a wreath had been poignantly thrown into the river,  quite a few of them made their way to the old cemetery on the hilltop. Soldiers’ graves there date from the Civil War. There’s even one for a solitary Confederate, who somehow ended up in this far northern town.   The High School band wheezed its way through “America the Beautiful”  and  got a sporting round of applause. An “Honor Guard”, silhouetted on the hill, fired off a gun salute and as they raised the flag back up from half-mast, a bugler played Taps, the American equivalent of the Last Post. 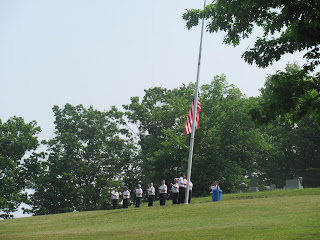 The lady Mayor made a speech,  the Deacon from St Mary’s church said a prayer and then a General in the Air Force Reserve spoke tenderly, if a little optimistically about Olean,  about its “Sense of gratitude” , its  “virtues, wholesomeness and neighbourhood values” . How it was a  “microcosm of America”. How the ideals which made it great, “propel our great nation and indeed the free world”. 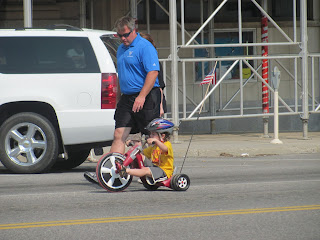 Suddenly, a  flag accidentally toppled over.  Letting the Stars and Stripes fall on the ground is one of the worst things you can do in America.  Several people took off like sprinters through the heat to rescue it.
It wasn’t quite like the old days but at least some people do still care. 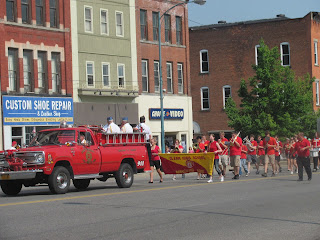 Good for them, I say. 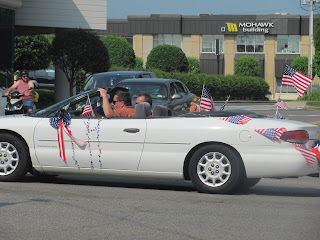 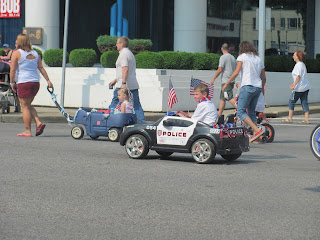