The Pitfalls of a Transatlantic Marriage 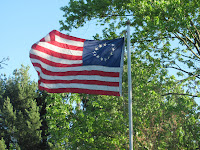 Memorial Day is when you put up your flag, on which more at a later date. Suffice to say that every self-respecting Western New York house has some kind of flagpole. Now normally we fly the Union Jack as well - to my chagrin custom dictates this has to go underneath the Stars and Stripes. But yesterday hubby put up only the American flag, his favourite one, which is the original Stars and Stripes with only 13 stars for the first 13 colonies. Being a Son of the American Revolution, with an ancestor who fought in it,  he is rather attached to it. "Where", I asked, "is MY flag?"  Hubby looked a trifle smug. "Memorial Day", he said, "honours soldiers who fought in all America's wars, including the Revolutionary War. The Union Jack would not be appropriate in this case."  I am evaluating my choice of response.
Posted by Alenka at 9:44 AM