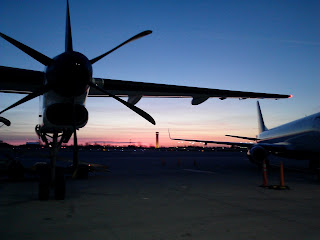 6am at Buffalo Airport and a beautiful sunrise. Not exactly a puddle-jumper but a small prop plane to get us to Washington in time for our connection for London.
I then make the big mistake of saying to myself, "Wow, could it be that we are going to have a trouble free journey?"
At this point, as we are sitting in the London plane on the tarmac, we hear the announcement.that there is a small maintenance issue but it has, ladies and gentlemen, been resolved and the maintenance people have gone away with the paperwork and they have not yet returned. It'll just be a couple of minutes and then we'll be on our way.  Ha.  I am by now a seasoned-enough traveller and I know that a couple of minutes is invariably a euphemism for something much longer and more complicated. Well, let's not beat about the bush;  it's invariably a bare-faced lie.  So we sit there and sit there, on the tarmac and in glorious sunshine too. I wonder, idly, where the maintenance man has absconded to with  our paperwork. The Bahamas perhaps?Or the Turks and Caicos?  Or Newark because United has now merged with Continental, causing some confusion.
A stewardess we haven't seen before sashays, smiling, down the cabin. "I just wanted to see 'hi' "  That is ominous. I always remember my aunt telling me about flying home from Canada in 1958 and the plane engine catching fire and the stewardess sashaying down the aisle smiling and saying 'hi' and drawing the curtains, which they had in those days, as she went. (They made it.)
"This plane", says hubby, "has been sitting here since last night. Why do they have to do the maintenance at the last minute?" (This is a mystery I have often pondered over. Like that time on Air Canada when a bit fell off the plane and they only noticed when we were about to taxi off. )
An hour later, another "couple of minutes" announcement. Half an hour after that we start moving backwards very slowly. Then we stop. We stop for a long time. Then we start moving forwards very slowly. "What's the betting we're going back to the gate?" says hubby.
Well we do take off eventually and we don't make up any time and arrive at Heathrow just before it closes for the night. And the only thing stopping me awarding a Flying Turkey Economy Plus to my friends at United Airlines is that the food was, for once, rather good (barbecued chicken and they heated up the cheese-and-turkey sandwich for tea)  and they did give me a free miniature of wine.
Posted by Alenka at 5:12 PM