A flashback to thursday, when the last remaining airworthy Lancaster bomber, along with a Spitfire, flew down the Hope Valley in Derbyshire in a 70th anniversary tribute to the Dambusters, who used to practise over nearby Derwent Reservoir before their daring 1943 raid on the Ruhr dams. 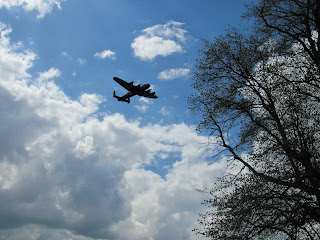 The weather had been terrible for a few days but amazingly that morning the sun came out. We were at Chatsworth, the stately home of the Dukes of Devonshire (note to my American friends - the Devonshires live in Derbyshire and you might be interested to know that the previous Duke's brother married JFK's sister)  and heard the planes would be flying over. What a bit of luck. 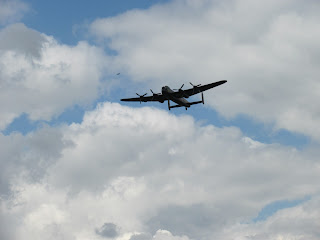 I got pretty excited about the  warbirds in Venice, Florida but I got much more excited about this.  The Lancaster's roar is like no other sound on earth and as it thunderered overhead, banked and returned twice more, I wasn't the only person in tears. I have a tenuous link to the Dambusters, in that I wrote a book of interviews with Group Captain Leonard Cheshire, who succeeded Guy Gibson at 617 Squadron. They went on to do even more intrepid things but nothing captured the imagination like the dams raid, with its bouncing bombs. If you haven't seen the old film with Richard Todd, you haven't lived. These days, when the film's shown on TV, I've heard that Gibson's dog's name, "Nigger" is bleeped out. There's been talk of dubbing it over with a name like Rover but maybe that's an apocryphal story... It would be difficult, as "Nigger" was also the code word  to announce the first dam breach. Nigger himself, a black lab, was sadly run over just before the raid. His master arranged for him to be buried at midnight.  As he prepared for the perilous mission, from which so few returned, Gibson mused that he and Nigger might well go into the ground at the same time. This also explains why there's always a dog in films about wartime flyers - well there was one in "Memphis Belle" anyway.
I may have been imagining it but there seemed to be rather a lot of black labs among the crowds of enthusiasts watching the planes at Chatsworth.  I didn't dare ask what their names were.
Posted by Alenka at 5:15 PM