Before we'd crossed the Bridge Tunnel on a beautiful sunny Sunday morning, we'd driven into Virginia. A sign at the side of the road, superimposed on a Confederate flag read, "Dixieland - the South Starts Here". Other signs announced"Swine n'Dine" and the "Great Machipongo Clam Shack".
Travelling south along the Historic Albemarle Highway, churches grew even more numerous, surrounded by giant car parks, as did pro-life billboards, "A Father's Joy", "My Heart Beats 18 Days After Conception." And some newer slogans: "Faithbook: God Has Sent You a Request". 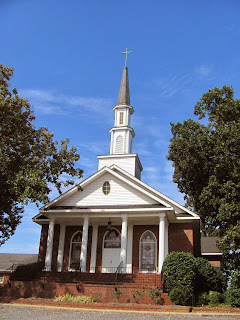 There were languid  rivers and lakes reflecting the trees and an old, broken down bridge over the Roanoke River . And there was our first cotton field.... 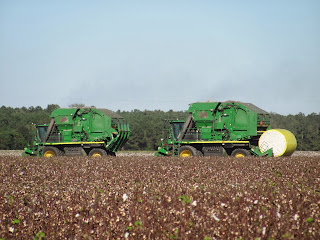 There seemed to be copious cotton fields, way before we'd even got into Georgia - more than I remembered from last time - a more pc substitute for tobacco perhaps?
We overnighted in Fuquay-Varina, North Carolina, once a spa town. "There's not much left of the waters, just a little stream. Blink and you've missed it!" said the girl in the delectable Stick Boy Bread Company bakery, which sold  us croissants and brioches and great lattes.
Monday saw mist rising over fields and rivers.    We passed a sign for a Dickensian-sounding law firm, "Thigpen and Jenkins". Some houses, like this one being renovated in Carthage, were gracious, 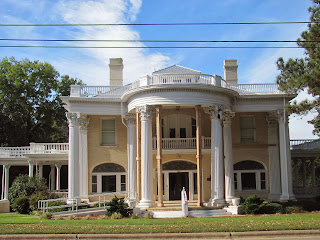 Others a little less so. 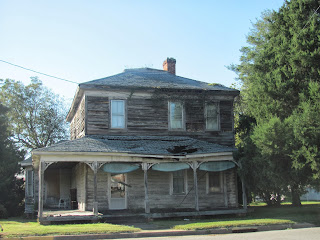 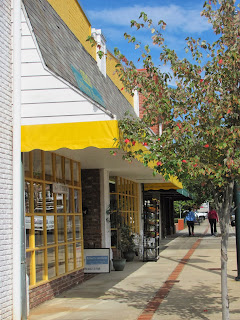 What was this? Not a forest fire but a tractor in (yet another) a cotton field. 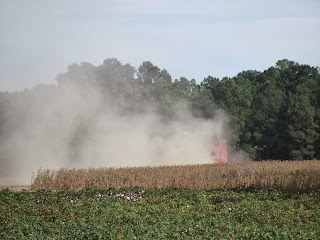 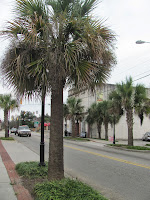 And our first avenue of live oaks with trailing Spanish moss. 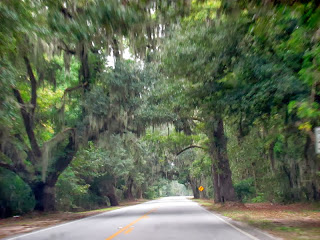 Yep - we were really down south now! Even if the places nearby were called Denmark, Norway, Sweden and Finland.
But all wasn't so sunny. At one point, in South Carolina,  we found ourselves in a dead zone - in more senses than one.  No phone reception anywhere, almost derelict towns, closed down factories, grass growing through concrete cracks, deprivation. It looked like a scene from the Walking Dead, with not even a zombie in sight. They must have really felt the recession here. We hadn't planned where to stay the night and this was one region of America where there wasn't the usual forest of hotels and fast food places on the outskirts of every town. The only motels were either boarded up or made Bates look like the Ritz. Finally, in Hampton, a fairly decent Days Inn.  Trains howled along the track opposite and and an angry baby screamed through the night but there was white clapboard and a wooden swing-seat and cheerful yellow tablecloths in the breakfast room. The manager had done the dried flower arrangements herself. The girl at the desk directed us to a Mexican restaurant we could walk to and it proved to be friendly and full of hunters in camouflage - their deer season lasts from August to January and you can bag as many as you want. To sister-in-law's endless amusement, The waitress struggled with my English English - normally they don't understand when I say "water"; she didn't understand when I said "salt", as in "Please, no salt on my 99 cent Margarita". Yes the Margaritas were just 99 cents. Things were looking up.
Posted by Alenka at 12:05 PM