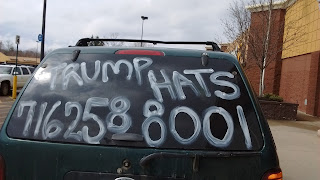 Now I'm not taking sides here but this is the first local bit of electioneering I've seen - save for a lone "Bernie" placard outside one house where I couldn't stop to get a photo. As a foreigner, I forebear to comment on America's puzzling taste in politicians. Though to be fair to my neighbours, many of them are distinctly underwhelmed and agonising over which lesser evil they can bring themselves to vote for. (And one tunefully described what he would shortly be doing: singing the Canadian National Anthem. )
Posted by Alenka at 2:07 PM