Or one of them, can be found in the Fraunces Tavern, a real old pub squeezed uncomfortably among the skyscrapers near Wall Street. It was here that George Washington bid a tearful farewell to his generals. Finding out that he wore badly-fitting dentures made this British visitor feel a little less like a loser. Plus there was a lock of his hair. Under that wig it was actually black. 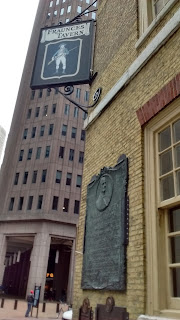 The Fraunces Tavern has a dark and cosy whisky bar and serves decent food - including Americanised Scotch eggs - not enough of the pink sausage meat to my mind but I suppose so-called healthy eating has taken over. 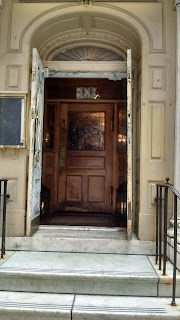 Incidentally, if you remember, a few years ago I discovered a place called Berkeley Springs (BURKley to Americans, of course) where George Washington had had a bath.
Posted by Alenka at 9:26 PM