The Other New York 3

Here is a very small selection of some new York City quirkery. How nice, for example, to spy a bootblack's stall. I doubt they do much business what with everyone wearing trainers these days but maybe some of those city slickers can afford proper shoes. 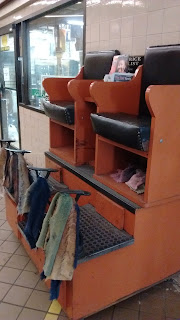 Speaking of city slickers, I'm not sure if this gentleman, spotted on the way to Washington Square, is representing the men's spa or the firm selling boxes. He's not really dressed for a spa. 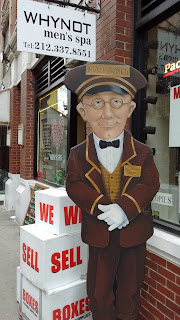 Washington Square has a dog park, with the usual rules and regulations. 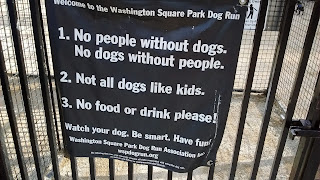 I'm glad they've at least remembered to say "have fun" at the end.

The sand, or whatever it was on the ground, smelt a bit pungent, though, this being New York City, it's probably frequently changed. The dogs were Designer of course and having as much fun as they could have, considering they probably spend a lot of their lives in high rise flats. I wonder if you'd be allowed in with a mongrel, which Americans call a "mutt", 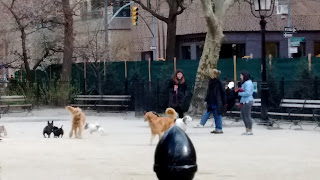 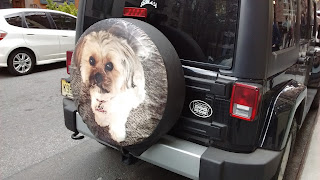 In Washington Square, someone had chalked out the words of the First Amendment to the Constitution - all about free speech, press, religion etc. But I suspect that some views popular in rural western New York would be best left unsaid in Washington Square. 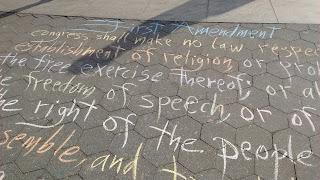 I have a feeling they may be running out of clever restaurant names. 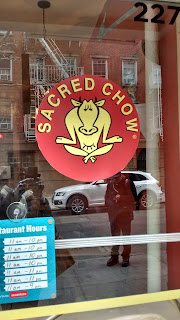 And while we're on the subject of spas, the Russian Bathhouse and Restaurant looks intriguing. Do you have the facial scrubs and massages while you slurp your borscht or are they a way to clean up afterwards? 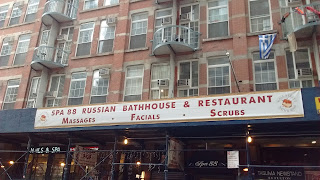 On the day we were there, you didn't need a Russian bathhouse to get wet. These tourists were forlornly snapping a statue of a bull at the end of Wall Street. The Trafalgar Square lions it wasn't but it was all they had. There's not much point trying to take a selfie with a skyscraper. 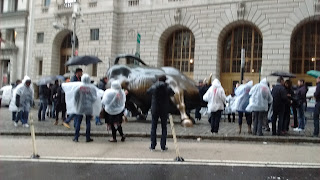 This bit of the pavement had a few history lessons - sorely needed in both America and Britain. 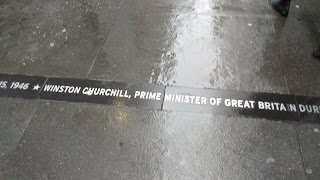 So back to those arty recycling bins - see below. They were in Central Park, where even dustbins are stylish. And everyone recycles, of course.