More Than A Thousand Islands

I always thought that pinky-orange salad dressing came from somewhere like Hawaii or Polynesia. No, actually, the Thousand Islands are in the St Lawrence River between America and Canada. Now there's a surprise. Nothing against our Canadian friends but we were not sorry to leave Brockville and the hotel from hell. As fast as we could, we headed back over the Thousand Islands Bridge. 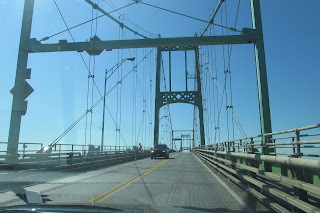 And made for a little tourist haven called Alexandria Bay, where hubby fondly remembered something called Uncle Sam's Boat Tours. We discovered they were still very much in business. 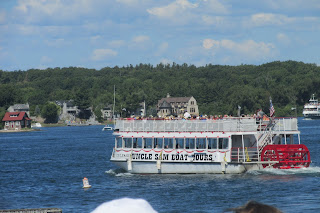 Our boat had an impressive-looking paddle on the back which was turning and churning - though, I suspect, not driving. 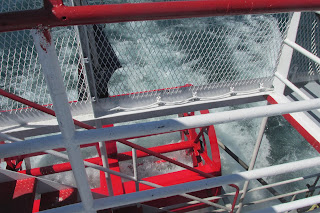 It was hot as a hundred devils as my dad used to say. But we found ourselves a good vantage point on the top deck. This being America, someone was wearing a philosophical T-shirt. 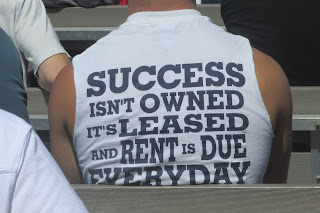 So off we chugged around some of the islands. 1800 islands, actually, not a thousand but if they put people right on that one they'd have to change the name of the salad dressing. Too many powerful vested interests there. Sorry about all the baseball caps but I had to rush to take a picture of this house, which apparently used to be owned by the Strauses - yes Mr and Mrs Isidor Straus, who refused to be parted and tragically perished together on the Titanic. 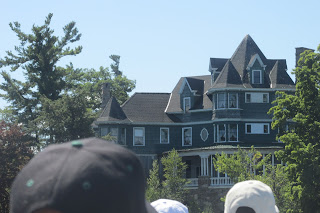 The Islands, at the turn of the 20th century were the playground of New York's rich and famous. Some of the old houses have burned down - it's not easy for the fire brigade to get to an island - but many are still there and probably command a hefty sum. Though they still called them "cottages". 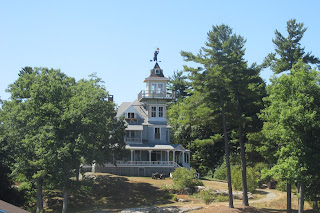 This one had an interesting bear weather vane. 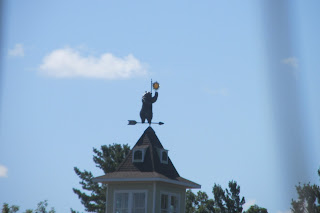 Some of the islands are very small, like this one, with a useful lighthouse to stop you from foundering on the rocks, or crashing your boat into the house. 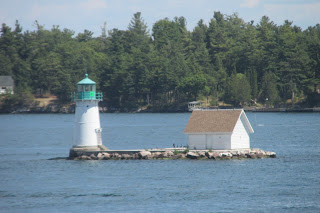 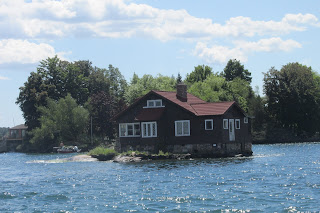 And they get even smaller. 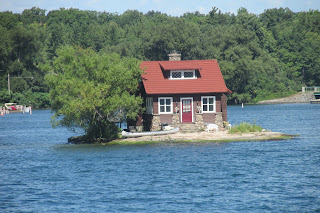 And smaller still. This one, having a tree on it, does qualify as a real island. 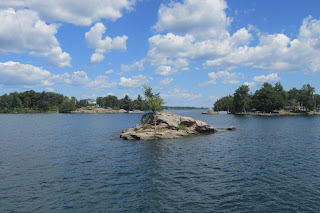 This house is owned by the Skull and Bones society, apparently some kind of American version of the Bullingdon Club. Any Skull-and-Bonesers can stay there. I was eager to spot one but they were keeping out of shot. 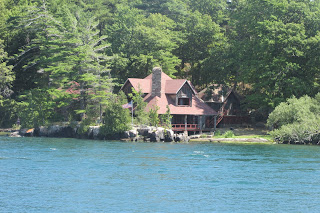 This one was the subject of one of our guide's many stories. According to her, the left-hand side is in Canada and the right-hand side in America. So if the owner wants to get away from it all, he crosses that little bridge you can see between them and he's in another country. (Later research denied the truth of this but I don't think the guide is going to stop sharing the story.)
She also got everyone rushing like lunatics to the side of the boat to spot a "very important landmark". No one could see it. It was the Canadian-American border, she said, "we get a kick out of getting people to do that!" Well I suppose they have to get their kicks somehow. It must get very boring spinning yarns to tourists all day. 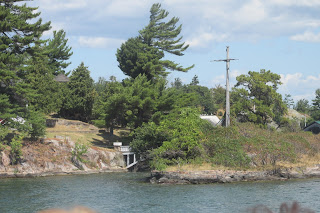 Our ultimate goal was yet another island - which was somewhat more spectacular...

To be Continued.
Posted by Alenka at 5:28 AM