There are some wonderful things about sailing from Buffalo Marina. And there are some less wonderful things. Some people just aren't happy unless they're making a loud noise. The restaurant is bad enough, blaring out tuneless music all Sunday afternoon. And the other day, about half a dozen obnoxious power boats circled round and round by the launch ramp. They seemed all to be meeting up with their friends. These are powerboats of an exceptionally raucous kind - the marine equivalent of motorbikes without silencers, only much louder. Fine, if that's how some sad people get their kicks but why do they have to impose it on others? 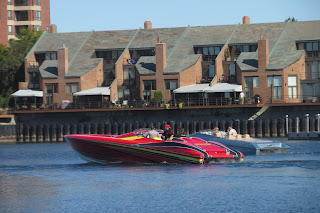 Here they are later on - evidently having some sort of race. 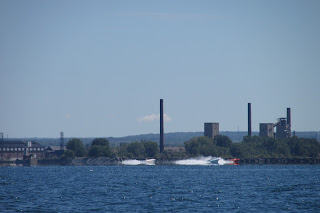 Now this is far more my sort of thing. 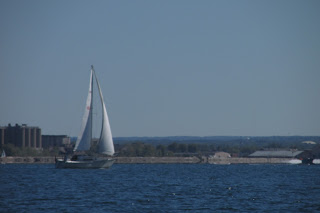 And just when we thought we are getting some peace and quiet (isn't that what sane people go out on the water for?) We heard another hideous din. Too far away to be the restaurant - no, it was the pleasure boat spewing out some of the loudest music I've ever heard. Keep it down will you!!! 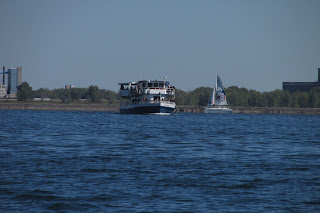 But no, they were oblivious of course. It's a wonder they didn't all come back stone deaf. 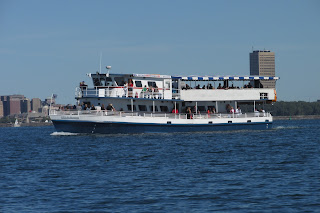 Then, all of a sudden, along came this monster. But it was a silent monster, creeping up on us like a ghost, not bothering to sound its horn. We were lucky we weren't right in its path.. It's not often these days that you see a lake freighter coming out of Buffalo. Perhaps he was carrying Cheerios, which are manufactured there, among the hulking grain elevators. At least something still is, so good luck to them. You can smell them if the wind's in the right direction. 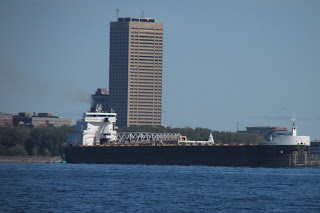 Judging by its name, this behemoth was American. 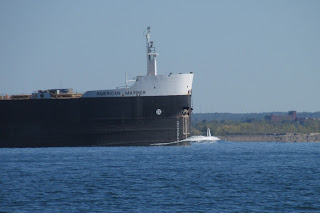 It's amazing how fast they move - and how quiet they are. We were once nearly mown down by one - that one had a name in Cyrillic - Russian, possibly. Now the Great Lakes all connect up with each other and the sea, you never know. In the twinkling of an eye he was on his way. 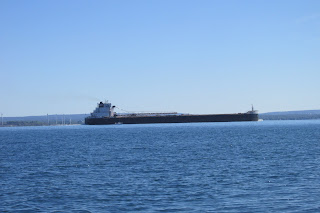 So at last we had the lake to ourselves. 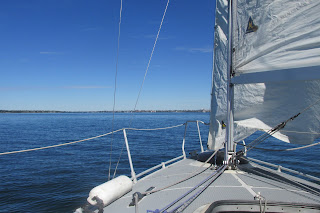 Except for some fishermen. Now they are quiet, civilised neighbours and no  problem with them being  a nuisance except when they anchor right in the middle of the exit to the harbour. That happens frequently - perhaps it's a good spot for fish. And they can say with good reason that they were there first. 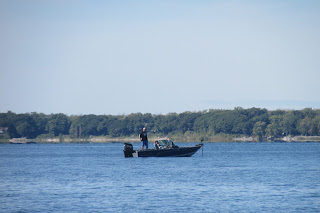 It was a glorious afternoon and the lake shimmered as if covered in rhinestones. 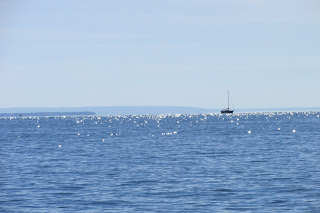 The noisemakers had long gone. They didn't know what they were missing. 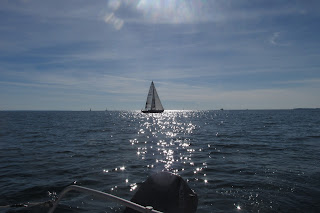