And no it's not in the Cotswolds 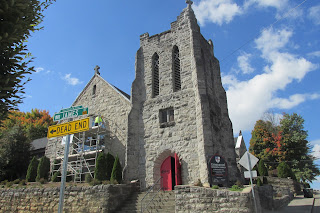 It's in Bristol. Bristol, Virginia, a village which, by the time we left it, had mysteriously turned into Bristol, Tennessee. Not sure how that works for the inhabitants. But Emmanuel Episcopal Church was charming. 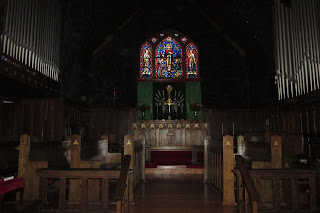 A bit dark but you can see how it could almost have been transplanted from Gloucestershire. 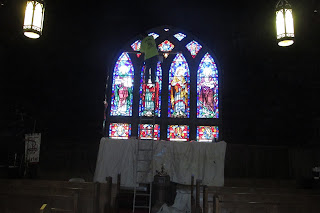 A craftsman was working on the stained glass windows, which is much better than substituting weird modern ones that don't mean anything. There was also a meditation labyrinth opposite. A real mediaeval touch. They have one at Chartres, I believe. 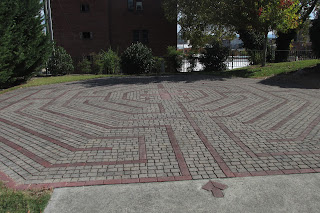 The church was in a neighbourhood called Solar Hill, which used to be part of a plantation but was developed after the Civil War into desirable housing. A sign said it was named for an observatory built to view the solar eclipse of August 7th 1869. So exciting at the time, no doubt and largely forgotten now. Bristol also had a nice little cafe called the Blackbird. I had a slice of key lime cheesecake - a little de trop but hey, it was a road trip. Next to it was a reassuring sign for exceedingly healthy ice cream. 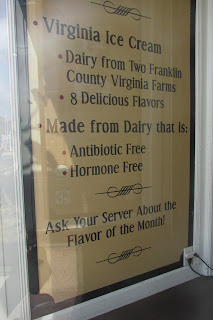 As a contrast, this was the Hillbilly Grocery, which boasted a "large selection of wine". I'd have thought it would be selling something more exotic, or rustic, shall we say. 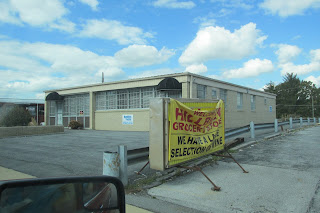 That reminded me of some of the places we encountered en route, like Turkey Bone and Slippery Rock University. Funnier if it was Slippery Slope.