Something odd is happening in our locality.  A crazed verge mower has escaped and is on the attack. 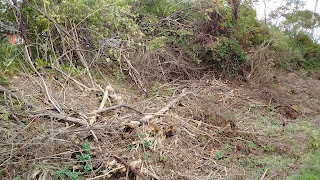 This is the tragedy wrought on the Allegheny River Trail, which used to be lined with bushes, blackberries and wildflowers. No, Hurricane Matthew didn't come anywhere near here. 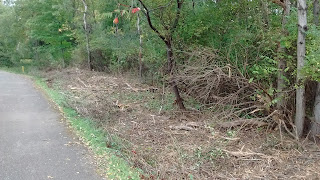 Only the odd, brave survivor remains, "What harm were we doing?" 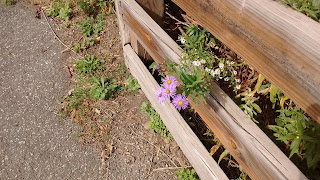 This massive purge of roadside greenery has spread to the edges of the Five Mile Road, which is a country road, lined with farms and occasional houses, so they're hardly likely to be preparing to plant an avenue of ornamental trees. This is America, so I doubt they're intending to install footpaths, so kids can walk to school and not have to take those wretched school buses, though that would be a wonderfully progressive step. Big machines have been holding up traffic, scraping up all the grass in chunks of turf and leaving ugly, wide strips of earth that will doubtless turn into a muddy morass.  Perhaps verge exterminating is a new 'elf and safety obsession, like gluten-free? Perhaps it's a top secret operation to rid the world of triffids or some other deadly poisonous plant that's been lurking in the hedgerows, ready to decimate civilisation.  Or else they've got taxpayers' money they need to use up on something and quick.
Posted by Alenka at 11:16 AM