... or rather Knoxville, Tennessee. which  proved to be a good place to find a pavement cafe. "Just head for Market Square", said the girl at the hotel. (I thought I was being clever with the title, until I realised that there really is a Paris, Tennessee, home of the World's Biggest Fish Fry. That's for our next trip.) 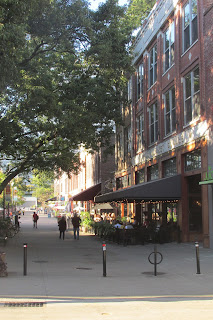 Knoxville did have a European feel to it, though it had some odd characters sitting around. But then so does Paris. It was interesting to see a monument to American suffragettes. 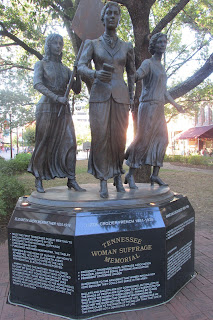 The bell used to be rung to summon the police if there was a riot. Better have one at West Ham's ground.

The square had a little park with a scenic water feature. 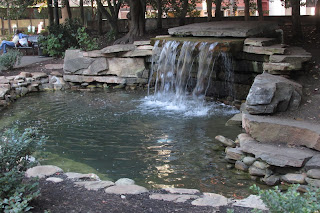 Or two. This was an "interactive fountain". That sounds a little alarming. 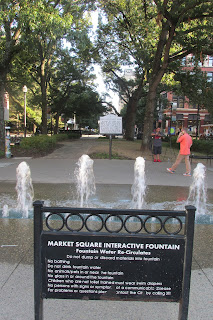 Does it suddenly jump out at you as you walk past like those at that palace in Salzburg? It's a bit too obvious for that. Perhaps the American version of 'elf n' safety won't allow too many surprises. I see there's the usual list of "No's" and "Don'ts" on the sign. The sort of thing that didn't trouble old Austrian Archbishops.
Meanwhile we adjourned to one of the cafes which proved a success. It was called "Tupelo Honey", a name hard to pronounce but I would recommend it. We sampled southern delicacies - fried green tomatoes, belly of pork (wonderful) and salted roast beets, all on grits. When you have grits at a diner they tend to taste like the stuff Oliver Twist asked for more of. But when a good restaurant prepares them properly they are sublime.  Below are two prime examples of the Transatlantic language barrier and of what Americans call  "biscuits." They are a little like scones on speed. 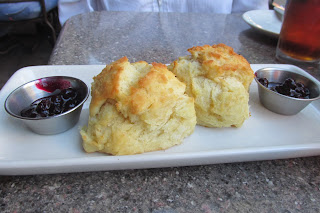 Parts of Knoxville had an interesting futuristic feel. 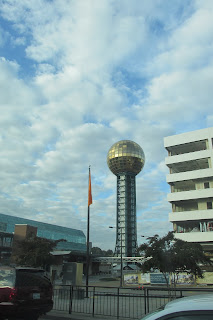 And there was a good liquor store where they persuaded us to buy local Bourbon. "Make sure you water it down", said the assistant ominously. And then we were out in the country again.. 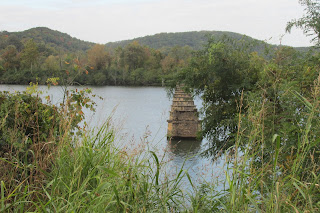 ...where we started seeing some odd phenomena.

And various warning signs. "Trucks turn around here" said one. And then there was this 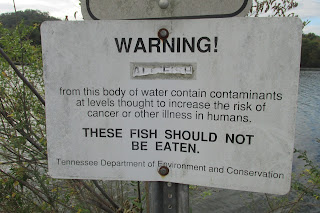 But I bet some of them are. The road ran past a dam 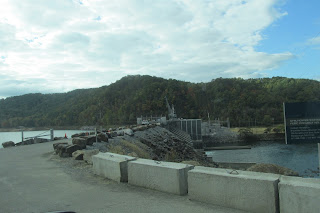 And towards some scenic mountains. 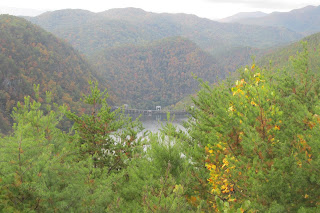 We were headed for a nice quiet country road through the hills. Or that's what we thought. Forget about trick fountains. We were about to get a seriously big surprise.