A typical scene on a road trip in October in election year. 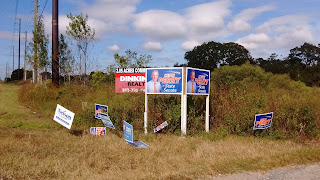 Personally I think the forests of signs at every street corner for all kinds of different positions and causes make it more, not less confusing. Well long live democracy. I'm not sure how accurate a pointer they are - though memorably, in 2016, we managed to drive down right to Florida without seeing a single Hillary Clinton sign (except one in a field, saying simply "Lock Her Up". ) It gave me a better tip on how that election was going to go than anything else.
This year, in our little enclave in south-west Florida,  I've seen more Governor signs for the Democrat, Andrew Gillum, than I have for the Republican, Ron de Santis, but that's neither here nor there.
As a foreigner I don't think I should get involved in the fray - unlike a British guy mentioned in the Wall Street Journal busy drumming up support for his favoured candidate on dating apps. Apparently that's the way millennials do their electioneering these days. He should mind his own business.
The press is getting fearfully excited, speaking of turmoil, high anxiety, a frantic last day and so on. Well of course the more turmoil the better for a good story. Here in south-west Florida I don't see much evidence of turmoil. "I'll just be pleased when it's all over", said my neighbour, wearily.
Posted by Alenka at 12:08 PM