Road Trip: The Wrath of Michael

A happy belated Thanksgiving to all my American friends and family. We are certainly thankful that Hurricane Michael avoided our little house in Golden Beach. But our hearts went out to people who were hit, in the Florida panhandle but also in Georgia.
So back to the road trip and sis-in-law and I were about to get a taste of just how bad it had been.  We drove south past peaceful cotton fields 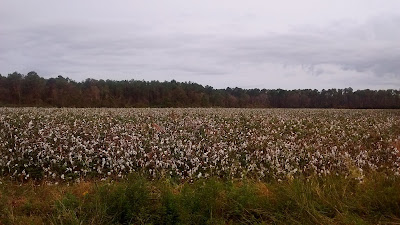 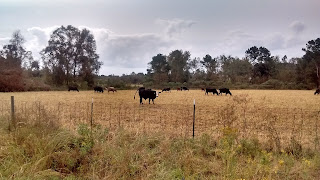 Michael, unlike Irma last year, had ploughed a narrow path.  But as we neared its trajectory, our first clue came.  We couldn't get a hotel room. Normally it's not hard finding accommodation and we don't do much booking in advance, waiting to see how far we're going to get on the day. This time we realised we'd made a bad miscalculation. Everything we tried was full - with people who'd lost their homes, with electricity workers and builders, with insurance agents and all the accompaniers of the aftermath of a major disaster. We were intruders in someone else's troubles but we had to find somewhere to sleep. Eventually we located the last remaining room in a place called Cordel,  Georgia, much further than we'd intended to go. Along the road, we started to see ripped up billboards, trailing rags and tatters of what had been signs. The hotel in Cordel proved to be in one of those conglomerations of hotels and fast food places that grow up around highway intersections.  Our room smelt of damp and mildew. We went out to find something, to eat, walking past past uprooted lamp-posts and debris. In one nearby hotel, ranks of utility trucks, come to help from all over the country, stood, weirdly illuminated, in the car park. 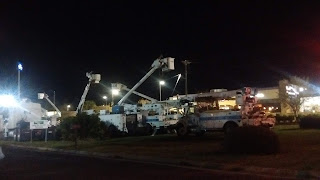 We did find somewhere decent for supper, where they had the excellent Widow Jane whisky on the drinks menu. Evidently it wasn't popular in Georgia. The barmaid was so happy that someone had ordered it that she came out personally to thank us.
On the road the next morning we passed ranks of uprooted trees. 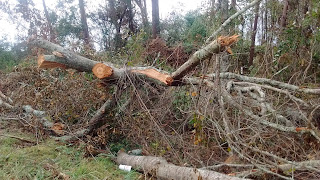 Virtually every second house had the tell-tale blue tarpaulin on its roof, covering damage.  One had a tree right through its roof and there were more shredded billboards. This house, in a tranquil forest setting that must have seemed such a good idea at the time, was possibly one of the luckiest in the state. 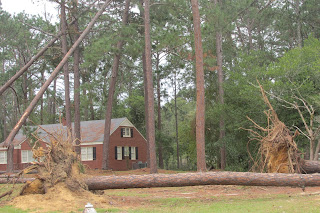 We counted some half-a-dozen uprooted trees in the front garden but the house appeared untouched. 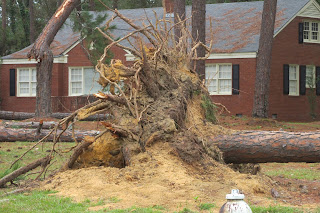 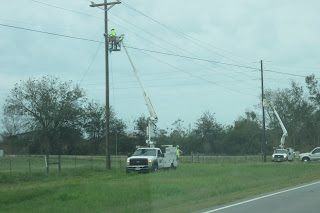 It was all a reminder of how relentless and capricious nature can be. Soon afterwards, we were out of it and life was normal again. For us, that is.

To be continued
Posted by Alenka at 5:58 PM