Sister-in-law and I were bowling through Kentucky, revelling in some gorgeous hilly scenery. As always, we looked for a coffee place, preferably serving food as well. The Masterpiece Cafe had the former but not the latter but there was an interesting gift shop selling T-shirts. 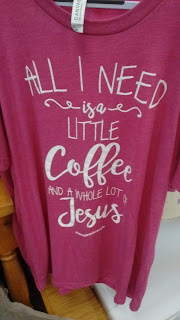 We were to see similar T-shirts again, further along the road, saying "A Little Coffee and a Whole Latte Jesus", which is a bit cleverer, I suppose.
We passed a very vain car... 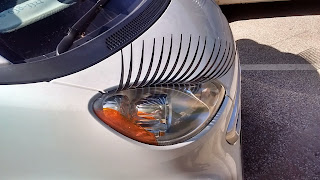 And my hopes were raised by the following... 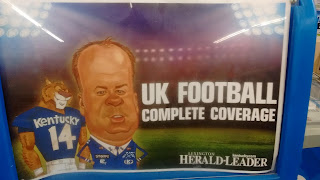 Wow - complete coverage of UK football! Well no. The phrase contained two misunderstandings. UK wasn't UK but the University of Kentucky. And football, of course, wasn't football. Oh well.
The biggest disappointment of the day, however, was lunch. We ended up in possibly the worst restaurant I've ever been to and believe me I've been to a few bad restaurants.   As soon as we went through the door we knew we'd made a mistake but the owner, a sprightly elderly lady, was onto us like a guided missile. The place was tiny. We couldn't escape without seeming rude. The room was cluttered with junk and toys but eventually we spotted the buffet from which we tried to salvage something palatable. An indefinable green vegetable cooked in what tasted like dishwater. Fishcakes worse than any school dinner nightmare. The thing about fishcakes is that they usually taste better than they look. This one didn't. It tasted of very old fish.  Worst of all, the owner's four-year-old grandson rampaged around our table, wielding a big stick and periodically clouting a sweet dispenser on the wall right behind our ears, "I've fixed it Nana!" He then changed weapons and grabbed a toy - or possibly real- telephone,monotonously shouting, "Call me Nanaaaaa!  Call me! CALL ME!!"  ratchetting it up until she dropped everything and did so and every so often emitting an ear-piercing shriek worthy of a Hitchcock film. She shrugged her shoulders,  "He's got, whadya call it, ADHD."
"They called that something else in my day", muttered sister-in-law, looking around for a wooden spoon.
We were the only customers. I forced down what I could, thinking of the time I enjoyed the hospitality of some Mongolian nomads and couldn't refuse the meal for fear of giving offence. The horse meat on offer was Michelin starred compared with that fishcake.  We stumbled out into the fresh air, cursing the Tripadvisor reviewers who'd extolled the "home cooking."  (I did subsequently read the fine print of the reviews and several had seen through the benevolent granny set up and queried why the place hadn't been shut down long ago.  One simply said, "Gross!")  Incidentally one of the best restaurants I ever went to was in Lexington, Kentucky, so I can't blame the state.
Posted by Alenka at 8:21 PM