Road Trip: From Ville to Ville

From Nashville to Hunstville, Alabama, driving a little way along the Nashville-Natchez Trace, a scenic highway whose natural beauties began to pale after a while.  We got off at a place called Columbia, in search, as always of a decent latte. The coffee shop was closed as it was Sunday but the owner was there doing some maintenance and directed us to Hattie Jane's Ice Cream opposite, where, I presume, they were a little less strictly observant. The coffee was fiendishly good, though the friendly server had never made a latte and I had to explain, having taken a sip, that she really needed to put hot milk into it, not cold. Continuing the fiendish theme, the burnt caramel pecan ice cream, if not quite good enough to sell your soul for, was fairly delicious.
At Huntsville , we had some difficulty finding our hotel. We kept coming up against ominous-looking security barriers and had to make frequent rapid U-turns, discretion being the better part of valour. It turned out that large parts  of the outskirts of Huntsville  were taken over by military bases of various sorts, some involving rocket science, which we would have needed a bit of to get ourselves out of the maze.
Early next morning, sunny but chilly, we hit the Botanical Gardens 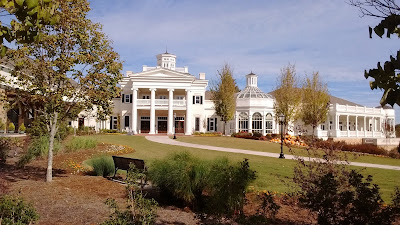 Set around a gracious-looking southern mansion. Maintenance crews of eager volunteers ("he's a retired professor, likes to help out") were out and about setting up Christmas displays.  That sort of thing is probably more important than the flowers these days. (Remember the Florida Reindeer last Christmas?)  Currently we were in full Halloween mode, with displays like the dragon you've already met below, made of tiny pumpkins 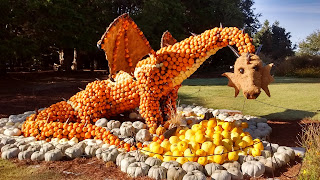 And a series called "Creatures of Myth", where we met unicorns, mermaids and another dragon 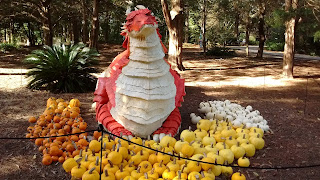 Cleverly the signs described each myth as if it were real. Latin name, habitat, distribution, lifespan ("more than 400 years"), character, ("Sleepy  and treasure-hoarding. Easily enraged.") etc. 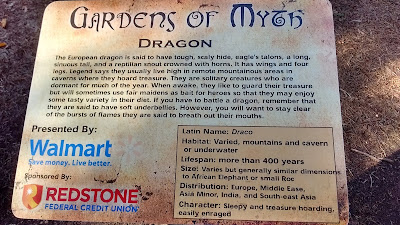 What would we do without Walmart?
There were flowers too, including these fellas, which were rampant. I wish I'd scribbled down the name. 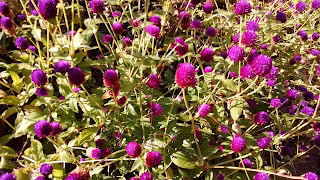 Among the attractions is a Biblical Garden, appropriate for the Bible Belt and a herb garden with medicinal plants - apparently Daniel Boone used the stuff in the foreground for tummy ache. 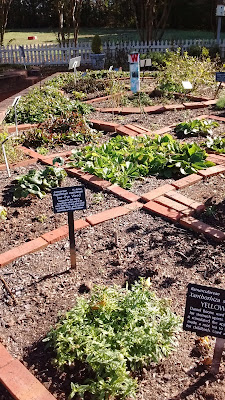 And there was a charming Trading Post Tree House 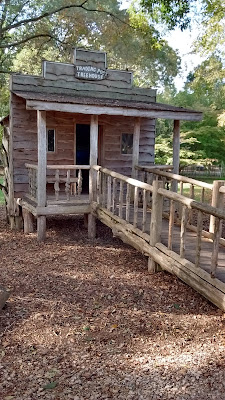 All in all, it was very elegant 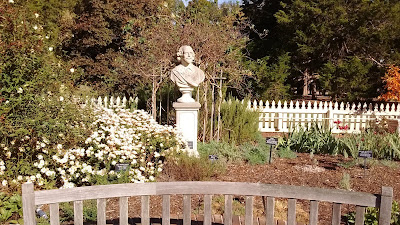 And everything looked good enough to eat 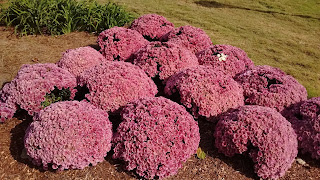 (Those chrysanthemums could have come straight out of Hattie Jane's.) 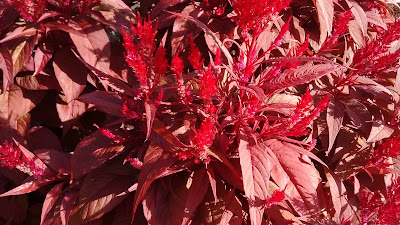 There was the requisite souvenir shops run by enthusiastically welcoming southern ladies with wonderful accents. A delightful experience, if only it hadn't been so cold.  We needed to get further south.