First of all, a big thank you to the chef at our Nashville hotel breakfast who was making omelettes and such to order. I said that sadly I wouldn't have the French toast because I didn't eat cinnamon and it was bound to have cinnamon, wasn't it? "Yes", he admitted,  "But I can make you some without!"  It made my day. I was never so phobic about cinnamon till I came to America and realised they put it - and far too much of it - into everything.
We were headed for Belle Meade, a stately home on the southern outskirts of Nashville. These days it's surrounded by large, expensive houses - a little like some parts of Surrey,  though at one time it had huge expanses of land and was, in the 19th century, a renowned Thoroughbred stud farm. 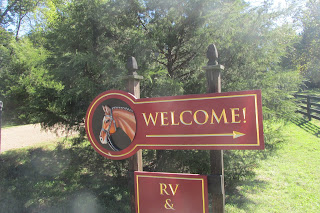 Just a couple of horses in a field left now for the tourists to look at but the house didn't disappoint. A costumed guide in bustle and bonnet launched into an elaborate history of the family and led us around the dark Victorian interior... 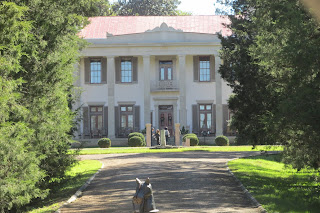 ...the walls hung with equine paintings, the rooms full of delicious Victorian knick-knacks such as elaborate china "parlor vases", ordered from Paris no less, bedecked with  turtle doves and flowers and fruit and coiling snakes, one symbolising weddings, the other funerals.   A room in which a son of the family had expired of some Victorian disease was especially poignant, with gloomy drapes and dark greens, vintage sports team pennants on the walls and riding boots still standing in a corner.
Interesting to hear that American Thoroughbreds in the 19th century were sent to race in Britain. Most were far too seasick after four weeks on a ship to perform but one, called Iroquois, actually won the 1881 Derby and St Leger and came second in the Guineas.

They had trained him on an English-style grass track and presumably coddled him carefully through the 19th century equivalent of jet lag.  The owner of Belle Meade was so taken with him that he spent thousands of dollars to buy him, which eventually bankrupted the family and cleared the path for the Surrey-style suburb and the mansion's eventual takeover by the state of Tennessee, which seems to be looking after it very lovingly.
Our guide, a proud Tennessee-an, claimed that Kentucky pulled a fast one on them by relaxing its drinking and gambling laws just when Tennessee was tightening its own and thus enticing the lucrative horse-racing industry over the border. Where American horse racing and breeding is concerned, Kentucky now reigns supreme. My Florida neighbour, who is from Kentucky, vehemently denied any skulduggery.

To be continued.
Posted by Alenka at 5:32 PM