Bangers to the Rescue (Again)

It's like the Number 9 bus. You spend ages waiting for one and then three turn up all at once. In similar fashion I spent many years living in America longing for proper British bangers. Once at a hotel I tasted sausages that were almost like bangers but not quite as they didn't have skins. I dragged the chef out of his kitchen to ask him where he got them. But they were not the real thing. In the days when we could travel to Blighty without a care in the world- ah those happy days! - I would eat several at the airport to compensate for the next few bangerless weeks.
Then, last winter in Florida you may recall that we found,  of all things, a German butcher that carried British bangers and pretty good they were too. Now we're back in western New York, we've found a place in Buffalo - yes Buffalo -that sells not one but several varieties of authentic banger, Classic, Cumberland, Lincolnshire, even chipolatas. And to think it was there all along! The place is called Parkers and you can order from them. The bangers and crumpets- (I ordered crumpets too, in all their rubbery splendour, not, repeat not, to be confused with what Americans call English muffins) arrived still frozen, packed in ice. All very efficient. So I could have bangers, slightly - perfectly - burned on each side. And mash. And onions. 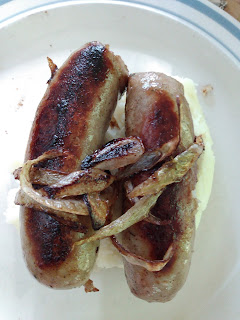 What a boon in these trying times when we all need some comfort for our souls.
Posted by Alenka at 4:40 PM