I see from the British newspapers that a monarch butterfly has been found in Dorset. It seems that the poor chap was on his way from North America to Mexico and got swept 3,500 miles off course by Hurricane Isaac. Apparently thousands of butterfly-watchers have descended on Dorset with their cameras, so the monarch probably feels a bit like the Duchess of Cambridge.
In our Western NY garden, we see the big, beautiful monarchs every day in summer, along with lots of others, like this one, which is similar but not, I think, the real McCoy. Any butterfly experts out there? 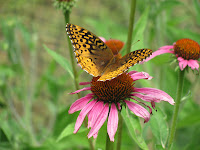 A friend once raised a monarch caterpillar in a jam-jar, feeding it on milkweed leaves. It reached butterfly-hood and then flew away without so much as a thank you.  (As an aside, an elderly local gentleman told me that,  as a small boy, he was paid to collect the siken tendrils from milkweed pods as they used them to make parachute silk during the War.) The butterfly paparazzi could do worse than come to us. Except I'm not disclosing the address.
Posted by Alenka at 5:02 PM