When I'm in London, I have a rather odd diet - mainly seeking out foods that I can't get back in rural Western New York. Not that the shops there aren't full of surprising delicacies ... ever eaten a mousecherry? No? Well I didn't eat this one either. 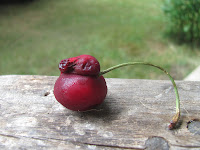 But despite that, WNY still has a deep, culinary black hole.  Things are no doubt different in Manhattan which, I assume, has a number of Ye Olde English Tea Shoppes and the like. In WNY, however,the steaks may be sublime, the pork chops to die for, but alas - there are no British bangers to be had anywhere. I've scoured the colder reaches of Tops supermarket but despite enough sausage varieties to make your head spin: Polish Kielbasa, Kosher, Italian, Texas Hots, Bratwurst, fifty different kinds of hot-dog, from every ethnic group that ever made it past the Statue of Liberty, I have looked in vain for good, honest pork sausages in proper skins. The kind that sizzle and pop, you know?   There are plenty of American diners that do a wonderful breakfast but believe it or not, what they call "sausages" are flat, round discs of sausage meat.  A little like mini-burgers with some kick.

The closest I got to bangers was in a motel somewhere in deepest Pennsylvania. I even forced my way into the kitchen to ask the chef where he got them. But they still didn't quite, as it were, cut the mustard.  After searching long and hard, hubby found me something called “link” sausages. I dashed for the frying-pan in drooling anticipation but, well, if truth be told, they were nice but they weren’t bangers. The disappointment was matched only by going into the Party Shop to buy Christmas crackers and being directed to the grocery store opposite. Crackers are things you eat with cheese in America - and they don’t even come with a silly hat.
Posted by Alenka at 9:16 AM