Hubby called me early this morning to stick my nose out of the front door.
"The air smells", he remarked, "Like Florida!"
And it did smell like Florida - a sort of exotic, flowery smell that didn't come from the woolly thyme I'm trying to nurture on the garden path, nor from the acrid Siberian Lavender that pops up optimistically in front of the house every year. No, this was bougainvillea and plumbago and even, perhaps, a whiff of a duny beach. I half expected to see a white egret come tiptoeing past the door, like Hopeful Charlie, who used to cadge outside our holiday flat in Longboat Key a couple of winters ago. 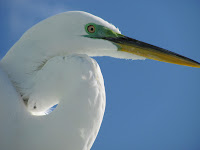 But it was still. Even the two woodpeckers who'd been chasing each other yesterday had gone.

I remembered one time when I was ski-ing in the French Alps and woke up one morning to see the ski slopes tinted pink. When you trod in the snow, the lower layer was white.  Locals said it was a fine dusting of sand blown northwards all the way from the Sahara.  Perhaps this was a similar phenomenon.
We looked at the two flags on our flagpole - the Stars and Stripes above and the Union Jack regrettably but according to American etiquette, underneath. They were still. Then, suddenly, they blew outwards.
"I hope we're not getting a hurricane", I mused.
"Of course not", said hubby. (Where have we heard that one before?)
As I set off up the lane for my morning run it was muggy, with an odd, misty light. Then I heard a clap of thunder. Then the rain came in giant, plopping drops. Then I turned on my heel and ran back down the hill. By the time I got back to the house I was drenched to the skin.  I am posting this quickly before we get a power cut.