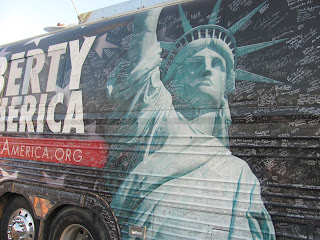 Who needs the Party Conventions when you've got the Carmike Cinema car park?
Election fever in Cattaraugus County, as previously noted , has taken a while to get going but may well be hotting up.  The hit political documentary "Obama 2016" has arrived at our local flicks. Now, I have not seen Obama 2016 but this is a film which I understand to be rather more popular among the President's detractors than his supporters. On Friday evening, I happened to be in the Carmike Cinema car park, which connects with the one for Walmart and Home Depot (America's equivalent of B and Q) and stumbled on a small but enthusiastic crowd of local Tea Partiers and others, who were having a tailgate party (the sort of thing Americans do before football matches) and handing out cupcakes, before going in en masse to see the film.  They included builders, lawyers, a dentist, a blueberry farmer, the owner of the hardware shop and a nun.  I have to say that,  contrary to the popular image the Tea Party has in some media, none of them looked like escaped lunatics.
A lady wearing a red, white and blue garland bounced up to me, "Do sign the bus!"  I made my excuses. Being a foreigner and scrupulously impartial, I never sign anything if I can help it. But I wondered if I'd heard right. Sign the bus? And indeed, there was a huge bus parked nearby, daubed with the Statue of Liberty and flying the Stars and Stripes and the Revolutionary "Don't Tread on Me" snake flag.  Its purpose, I was told, was to educate people about the American Constitution, with which, the organisers evidently believe,  the current administration is playing fast and loose. The bus had been doing the rounds of a number of towns and cities. And sure enough, it was pretty well plastered in signatures, along with slogans like "God Bless America" and "Let Freedom Ring." One said, "Not racist, not violent, just no longer silent."
In a particular type of American way, this all seemed to be celebrating a concept, which could loosely be described as Freedom from Big Government, rather than a candidate. Though a fair number said they were warming to Mitt Romney. And a man was standing brandishing a "2012 America vs Obama" sign at the various cars passing the  Carmike on their way to Walmart. A few of them tooted merrily as they went past. In the interests of impartiality, I do have to report that at least one car went by, also hooting vigorously, its driver grinning and waving a "Vote Obama" sticker.
Posted by Alenka at 6:25 AM