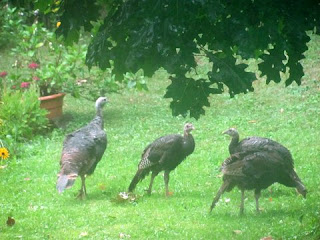 Remember yesterday's post - and my fully expecting to see an egret flown in from Florida? Well as coincidence would have it, look who came visiting later that morning!  This is the first time we've seen our turkey family - probably descendants of the original gang - for many months. And in the middle of a violent thunderstorm to boot. (Though no tornadoes here as yet.) Evidently, they like wet weather and were very interested in something in the grass. They didn't show much enthusiasm for the sunlounger. Well it was raining. And they're not stupid. 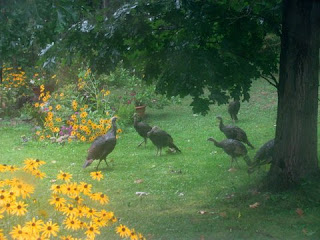 Of course, it's hard to get good pictures. Their hearing is so acute that make just one small sound and they're off. So these were taken through two sets of windows.