Flashback to Florida: The Warbirds Land

I can't resist a few of these flashbacks while the weather's still cold. This is from a couple of weeks ago...... 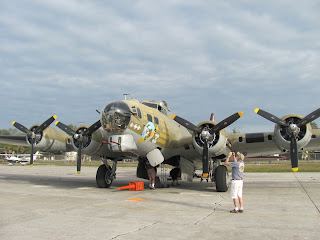 “Warbirds at Venice Airport.”  The sign puzzled me at first. What was a warbird?  A pelican wielding an AK47?   Hubby, being American, explained.  Above is a fine example of a warbird.
Before I go on,  a word about Venice Airport.   That is, of course, the Florida Venice, not Venice, Italy, though there is an Italian-American club there with a gondola outside.
Venice is a quaint unassuming seaside community, very un-Florida-like. And the airport is tiny, with little prop planes and the odd private jet which probably meant to land in swanky Naples (also Florida), further south.  A few years ago, Venice Airport also became the most infamous in America; in the days before they ran too many background checks on student pilots, it was where the  9/11 terrorists learned to fly -  and appeared not to be interested in learning how to land. The town doesn’t really like to talk about it.
Seeing the Warbirds was a sort of expiation, perhaps. They were part of an educational tour called "Wings of Freedom". Next stop would be Fort Myers, down the coast.
The queues  for a tour stretched out of the airport.  We’d have had to wait an hour to get close. “Come back first thing Monday morning,” someone said, which I did, only to find the plane crews packing up to leave.  The wheelie bags looked a little incongruous. 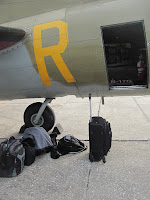 But in the meantime I and some other early risers could wander around virtually at will, taking in the grimly magnificent B-17 Flying Fortress, with a cartoon of Christopher Columbus (I thought it was George Washington at first - more fool me) thumbing his nose at Hitler, 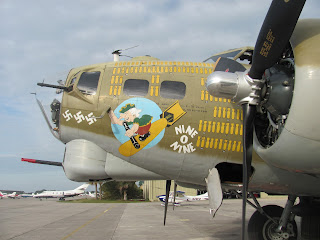 the B-24 Liberator , the last one, I'm told, left flying in the world (and they don't know how long that will keep flying, it costing millions to keep it in the air) 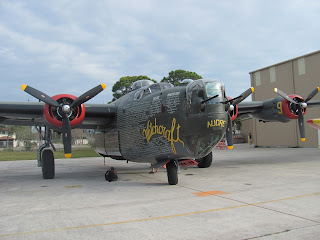 and the silver fighter, the P51 Mustang, America’s answer to the Spitfire, this one nicknamed “Betty Jane”.  ( Mustangs were actually based at Venice when it was a wartime base, which makes the airport’s subsequent brief notoriety all the more ironic.) 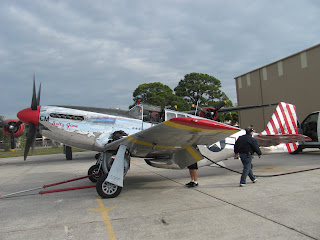 The Flying Fortress flew daylight missions out of Bassingbourn,  near Cambridge, in waves of a thousand aircraft. They left the night-flying to the RAF, joked one of the modern crew, as the Brits could see better.  I took a peek at the cramped, functional interior, smelled the oily smell.
Nostalgic US Air Force World War Two veterans, some in wheelchairs, were there, modestly  reminiscing about their experiences.  One former gunner described the perils of crouching on a  low-backed metal seat, squeezed in the gun turret under the B-17’s belly. At one point, a large piece of flak lodged in the seat back.  A little higher and it would have lodged in him.
Jack C. Hubbard, Major USAF (Retired) was selling copies of his book, "Patriots Will". 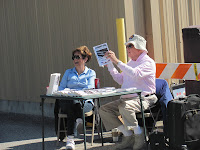 The handout had a promising extract:  "BANG! Hubbard kicked the bomb trying to dislodge it...."
He hoped it would "help young people better understand World War ll in a way some modern-day history books fail to do."
The present–day pilot told me how fascinated children were by the Warbirds,   “They don’t teach about World War Two in our schools any more.”
He also mentioned that some American towns don’t want them,  due to misplaced political correctness. While the Allied bombing certainly had its controversial side, it’s still a view I find hard to fathom. And I'm quite well-qualified to say that as these picturesque WMDs bombed the hell out of my mother's home in occupied Slovenia leaving only a willow tree on the riverbank. But she forgave them since the the family had by then been ousted, Grandpa sent to Dachau as a political prisoner and the Gestapo in residence. In fact, she said, she heard that the neighbours cheered.  I tried to tell the modern pilot the story but he didn't seem interested. Your own country's war is always more important.
Some years ago, I had the privilege of interviewing the late Group Captain Leonard Cheshire, VC, for a book on his life.  He was one of the RAF’s most decorated bomber pilots and later founded a worldwide charity network.  I got some insight into what these, often alarmingly young, wartime airmen went through and the sacrifices they made. Seeing the American veterans brought a big lump to my throat.

We waited for the planes to take off. They were refuelled by modern Shell trucks, 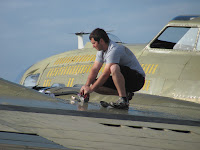 the checks made, the great propellors spun round. 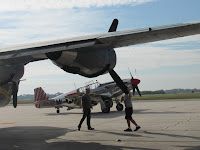 Some passengers who’d paid 400 dollars for the ride had their photos taken and got on.  Baseball caps were blown off by the blast of air from the Liberator’s rear. Then they were off, first trundling a little clumsily down the runway, then picking up speed and with a great roar taking off into the blue. The man next to me shook his head, “Just imagine a thousand of them all together!” 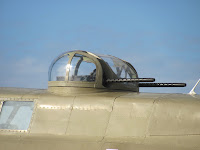