Adventures With a Boat Part 2 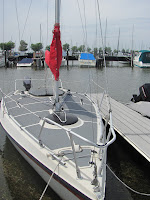 This year we got to Buffalo Marina without mishap. Titanic ll quite likes her summer home, though she has to sharea berth  with a rather overweight speedboat. While hubby does the technical stuff (I do help to haul the mast up), I go for a wander along the marina.  The marina should be one of the most beautiful places in Buffalo but it's actually a Lost Opportunity. Hundreds of people converging every summer weekend to laze in lawn chairs and watch the boats and the world go by and nowhere to buy a decent coffee. The one small, greasy spoon has a bleak, never-changing menu and stops serving breakfast, its only decent offering, at 10.30. There is one restaurant that rejoices in a monopoly and blares out obnoxious loud music all day, just when you're trying to communicate with your spouse at the boat ramp.  What this marina needs is a bit of free enterprise - a few stalls selling good coffee, barbecue, baked potatoes, even ice cream. Anything that would provide competition. But in New York State, places run by the government (Niagara Falls park is another) things are tightly controlled. You might as well be in the old USSR.
Speaking of which.... 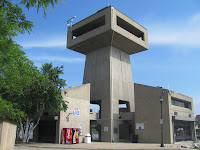 This building, further along at the end of the marina, is probably the ugliest sight in Western New York. I can't imagine what kind of lunatic designed it and what other lunatics allowed it to be built. But hey, it's our tax dollars at work!
But from the top, up several sets of grim, concrete steps, redolent of a London sink council estate, there is a rather nice view.  Of Buffalo's city hall in the haze. Far too big now for the declining city. Stalin gothic crossed with art deco but it has a certain magnificence. To the right of it is the second ugliest building in Western New York. According to hubby, who's been in there, the long thin, narrow, inset windows harbour legions of spiders and are impossible to clean. 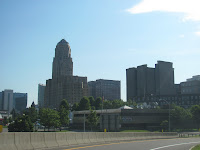 In another direction, you can just see the skyway, another misconceived gem of city planning, which hampers  any kind of attractive development along the lakefront. There's talk of it being pulled down. A very good idea. In the foreground nestle our boat docks. 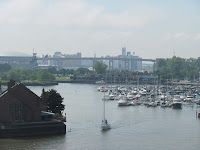 And from another side, you can see Canada. The brown water is mud churned up by the river which flows into the lake. 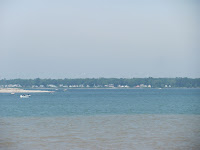 And from the fourth side - that's where we'll be once hubby finished the rigging. 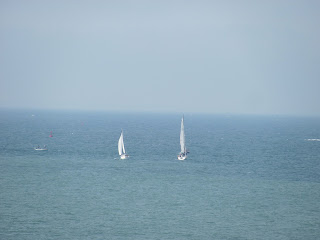 We have to share the marina with all and sundry... 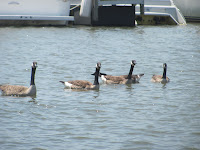 And boats with peculiar names like "Sea's The Moment", "Knot Work" and this one, which raced us out. 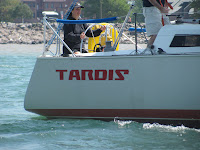 But once out, we're free as birds, except for the occasional powerboat shooting across our bows. This one was polite and slowed down. A rare occurrence. Miscreants have been warned; they will be named and shamed on these pages. 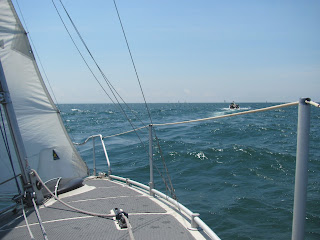 Typical Lake Erie chop but a beautiful day nevertheless.
Posted by Alenka at 10:37 AM