Today is the culmination of  "Old Home Week" in our village, which includes the best parade you can get hereabouts.. Sadly, it's looking like a washout. It's been pelting down with rain for  - oh I don't know, weeks and weeks. Four years ago, it was a much sunnier day, so here's a report I did then..... 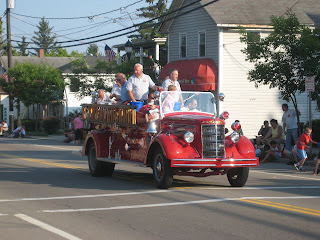 I just love American parades.    Our village of Allegany was advertising something called “Old Home Week”. I was a bit hazy about what it meant but there was going to be a parade, on the Saturday evening, right through the village. “C’mon”, I said to hubby “we’ve got to see this”.  He looked slightly reluctant, as an American brought up on parades of every shape and size would be, but he relented and off we went to take up position on the high street, which, in America is called “Main Street”. Ours still has some nostalgia value, with quaint, flat-fronted shop fronts in pretty colours, now mostly bars catering for the students at the Franciscan university, a white-fenced war memorial and a town hall topped by a cupola.
People were already lining the streets, well-prepared, as Americans always are, in their camp chairs with the holes in the arms for drinking cups, one chap with an alert Jack Russell  sitting on his lap. 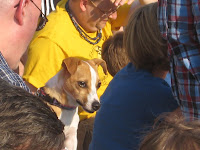 Children perched along the kerb. A balloon-seller with armfuls of inflated snakes, frogs and jet planes walked up and down, passing a lady dressed as a turquoise Statue of Liberty. Everyone’s eyes were fixed to the bit of Main Street between the cemetery and the university, where the parade was due to start from and where a perspiring cop was patiently diverting traffic.
Next thing, there was a choir of police sirens and police cars came crawling along, their contents smiling and waving and throwing sweets to the children, followed by a fire engine, all scarlet and chrome and gleam, followed by another fire engine and another and another.  Every fire engine from every village for miles around, from Humphrey, from Portville, from Franklinville, from Eldred Township and Clarksville was in the parade,  all full of volunteer firemen (and women) and their families, flying banners proclaiming “Pride is our Pay” and all raining sweets. Like flocks of birds, kids rushed in waves into the road to grab their booty, revelling, for once, in officially sanctioned hazardous activity. 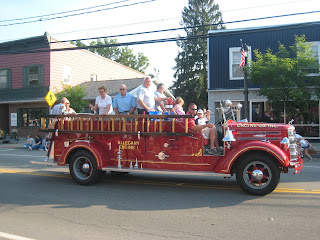 Then came the pipes and drums of a local police band, resplendent in kilts and sporrans, puffing away at “Scotland the Brave” and the Marine Hymn.
Then more firemen, marching this time, in white uniform caps and little Irish dancers in ringletted wigs, teetering precariously on a tractor trailer driven by a boy who didn’t look much older and the Williams Antique Tractor Pulling Team and  the band from the Kinney Hose Company of Weston Mills. The parade stalled for a moment as parades do, then “Hup!” said the band leader and they were off again.
There were people walking an assortment of dogs of every shape and size, each mutt sporting a Stars and Stripes bandana.  My Jack Russell neighbour jumped up and pricked his ears.
Then, inexplicably, came a clutch of grizzled men in tiny go-karts, buzzing frantically to and fro like wasps. They stopped in a neat line at the war memorial and saluted.
Then more fire engines and yet more fire engines, from Limestone, Great Valley, Hinsdale and faraway Cuba  (Cuba, New York, that is) – and the token banner from McDonalds.
And lastly, a bunch of cowboys on skittish horses, with two little girls called Courtney and Chardonnay, riding bareback on a chestnut pony with hearts and arrows painted on its sides.
Everyone was still throwing sweets. The kids next to me were saturated, their mother trying to palm off handfuls of tootsie rolls to another family, “No really thanks, we’re done!” 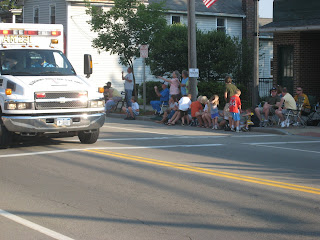 I still wasn’t much the wiser about Old Home Week. Perhaps, in the past, it meant people coming back from the city to their home village. These days, for Allegany at any rate,  it’s become a fundraiser for the volunteer firemen who provide their unpaid services for many of rural western New York’s outlying villages. Anyway, what the hey, it’s a chance for a bit of heart-stirring, along with hot dogs, toffee apples, a water rodeo (a water fight to you and me but sadly we missed it) and some village gossip. I don’t know why America does this sort of thing so well but it does - and even hubby enjoyed it. 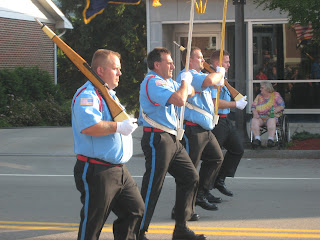