Our lane, early on a June morning, capturing the sun's rays and a glimpse of the ubiquitous overhead cables that dot our neighbourhood in Heath Robinson-like complexity. That's part of the reason why we have so many power cuts. 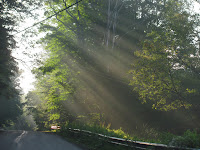 Down in the valley, a layer of mist hangs over the Five Mile Baptist Church, so-called because it's on the Five Mile Road, so called because it runs alongside the Five Mile Creek, which is American for stream. The creek so called, I'm told  because it's five miles from the next creek intersecting the Allegheny River. Lost already? It was a while before I learned that; I used to puzzle over the road because it goes on for a lot longer than five miles. As for the church, it's got a flourishing congregation, the large car park impressively full for Sunday services. In the background, hills where there was once a ski area, now closed and overgrown. 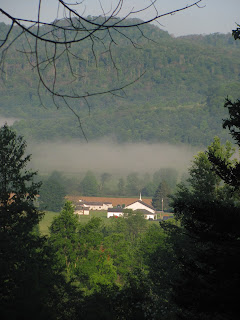 Some encouraging new growth. That delicate green is one of my favourite botanical sights. 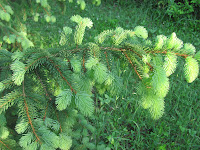 These roadside flowers, an elusively delicate scent, are disappearing now, making way for buttercups and daisies. In May and early June they were quite glorious, though of course the best patches - whole banks of them - were by the motorway, where it's hard to take a photograph. They are the subject of some dispute;  Hubby says they are phlox, a friends insists they're called dame's rocket. 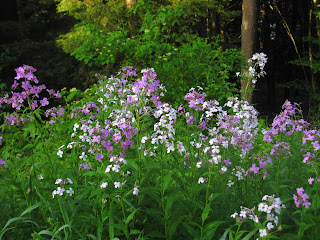 I've tried in vain to dig some up and plant them in the garden but they won't be told what to do. Sometimes, though, they appear of their own accord.
Posted by Alenka at 7:35 PM