For now.  I leave you with more stately buildings... 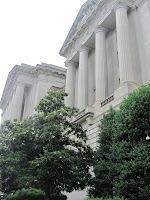 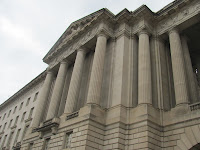 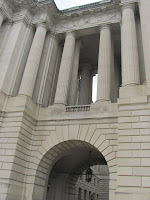 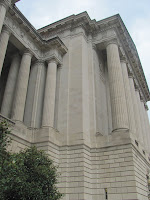 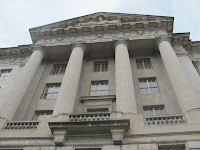 More oddities.... The Carnegie Library undeservedly getting the finger. 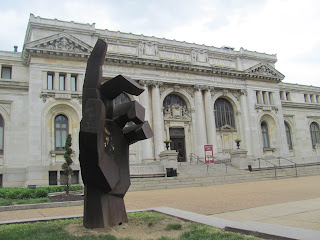 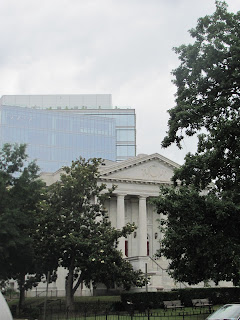 Benjamin Franklin outside the Old Post Office. I wonder what he'd make of the times we live in. 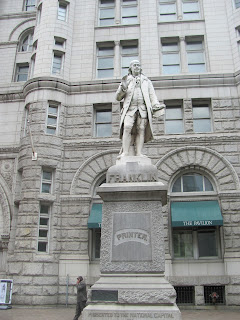 The Washington Monument still not quite recovered from the 2011 earthquake 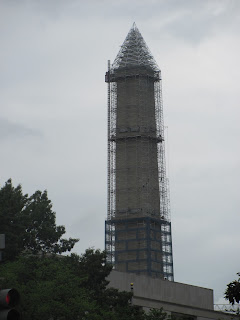 And a piano in a swimming pool. 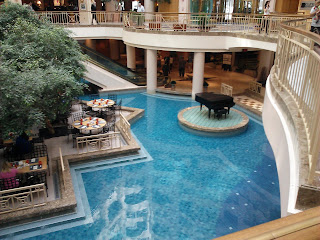 In our conference hotel. All is not what it seems. This is rather shallow to be a swimming pool and I think is meant to be a Blue Lagoon, where you can dine on extremely small portions of extremely healthy food while getting ill through the back door, shivering in the air conditioning. Unnecessary air conditioning - blasting out an arctic gale when it's a normal pleasant warm day outside - is one of my few real beefs about America. That and waiting staff who don't leave you alone. I noticed that in the other restaurant in the hotel they're actually given training on "interacting" with the customers. Other hotel staff smile so much that they can barely talk through it.  As in most expense account places they blithely charge ten dollars for the most basic internet but when hubby begged for a microwave to heat up his breakfast porridge the whole gargantuan building, which goes down as many floors as it goes up, getting colder all the time, couldn't come up with one. Stay in a cheap and cheerful motel, where people are actually paying their own bills and you get a virtually identical room, free Wi-fi and free breakfast. For half the price. That's America, the land of opportunity.

Update: On my return I wrote the following for my regular column for the Catholic Times in Britain. I've abridged it slightly ....


It may only be a short flight away but Washington DC  is light years from our home in rural Western New York.
The  nation’s capital bristles with monuments,  embassies  and grandiose government buildings on  spacious streets .........   Where there was once a mosquito-ridden swamp, there are now neat, green parks and earnest, smartly-dressed people, many in comfortable government jobs, riding to work on the  “Metro”, the stark, clinical underground train system, which couldn’t be more different from the cheerful, smelly, chaotic  London Underground if it tried.  Tourists converge in gaggles,  visiting the great museums of the Smithsonian Institution. A recent report said that some of the Washington suburbs are now among the most affluent parts of the country. The beltway – Washington’s version of the M25 around the city - certainly has the worst rush-hour traffic  I’ve ever seen.
I first visited Washington in the 1970s, long before I met my American husband and came to live in the States.  I remember that it was relatively easy then to do the tour of the White House. No one got too uptight about security.  (And in the even older days, Presidents would have a regular “open house”,  letting every Tom, Dick and Harry who wanted to come in and petition them.  Not very practical, as they eventually realised).
Downtown Washington is still an enormously popular tourist destination. Crocodiles of schoolchildren are everywhere, in identically coloured T-shirts,  presumably so they don’t get lost. Marshalled by harassed teachers, they’re learning about their nation’s heritage.  One of the biggest queues I saw was outside Ford’s Theatre, where Lincoln was assassinated in 1865. Opposite is the house where he died, next to it souvenir emporia and “Lincoln’s Waffle Shop”.    Presidential assassinations,  successful or attempted,  are unfortunately  recurring landmarks throughout America’s story.
But some things have changed since I first saw Washington. There are spanking new museums, including one, the “Newseum”, which, I’ve noted, manages to recount the history of newsgathering while hardly mentioning the BBC but that’s possibly just my British prejudice.  The Newseum has,  emblazoned in giant letters on its façade,  the words of the First Amendment to the United States Constitution.  You know, the one that talks about Freedom of Speech and Freedom of Religion.  America, after all, is known as a bastion of freedom.
So it’s ironic that the other big difference I’ve noticed from my first visit to Washington,  is a massively enhanced security presence.  Police cars are everywhere. The White House, these days, is a virtual no-go area. And walking past one government building, I was astonished to see  a man with a mirror on a stick, checking the undersides of cars as they drove in.  I had no idea that happened in America.
And indeed, while I was in Washington last week,  the debate over  freedom and security was very much in the news, with the breaking story that government agencies had been hoovering up swathes of  private individuals’ phone and internet records, allegedly  in the interests of national safety.
Whatever the rights and wrongs, many people I spoke to were shocked to hear about it and some were very angry.  It may help fight terrorism, they said, but at what price? Was it really the “American Way”? While others bemoaned that it was simply a sad reflection of our times and the  American Way had to move with them. The rumpus is unlikely to go away any time soon.
The same goes for recent revelations that the Internal Revenue Service, America’s taxman, deliberately targetted for special scrutiny conservative groups that opposed the Obama administration’s policies.
The big debate is how all this squares with the words of the Constitution  so proudly displayed on the Newseum.    Is America still the Land of the Free – or just the Sort of Free?
As I walked through Washington, I noticed the Washington Monument, the tall obelisk damaged in the earthquake of 2011. It’s still shrouded in scaffolding.  And I wondered what the first President would make of the days we live in now.