Christmas greetings from Western New York.  Americans still tend to say, "Happy Holidays" but I've noticed that if you get in first with "Merry Christmas" (not Happy - that's British), they'll merrily say it back.  Beside being absurdly PC, I do think "Holidays" is a misnomer. After all the cooking and shopping and wrapping and decorating and rushing around, you need a holiday to recuperate.
Plus it all seems a bit daft as crib scenes abound everywhere... 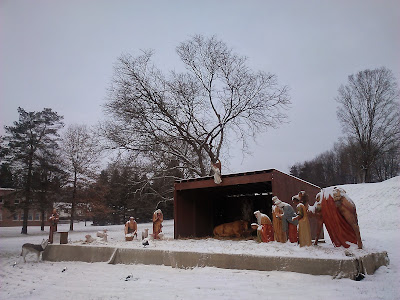 This lovely, life size one comes courtesy of the Franciscan Sisters of Allegany, complete with both exotic and local animals (see the wolf on the left.)   Of course it's not on public land - so hasn't fallen foul of the PC thought police.
As for me, while I still can't get used to having roast beef and Yorkshire pudding for Christmas, I have introduced some British touches, namely crackers. When I innocently tried to buy these in my early days here, I was directed to the biscuit shelves. This year we ordered them online but fearful they'd be late, we also found some in a shop in Buffalo. Of course the original lot did arrive on time (though they wouldn't have, had we not bought the others..) Well, they'll keep. And it looks as though we'll have a white Christmas after all. 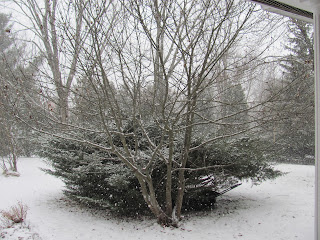