Boxing Day in America is a bit of a damp squib. Basically it doesn't exist. It's not a Bank Holiday, most people go back to work and Christmas is, to all intents and purposes, over. Though I did see one TV commercial for a local shop, advertising "Boxing Day" sales, to a background of Rule Britannia and marching soldiers in bearskins. I suppose some Americans have cottoned on to Boxing Day in the same way as Britons have, suddenly and inexplicably, embraced the most hectic and frazzling shopping day on the American calendar, Black Friday. In America that makes sense as it's the day after Thanksgiving but what  British shoppers make of it I can't fathom.
Yesterday, though, I did spot some Christmas workers enjoying a hard-earned rest. 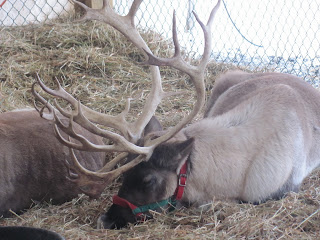 This was at the local maple syrup farm, Spragues, which has a rather good restaurant, to which we repaired for some blueberry waffles with bacon and their home-made sausage. Not exactly British bangers; American "breakfast sausage" looks like hamburgers.
There's plenty of fun for the kids.. 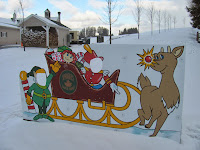 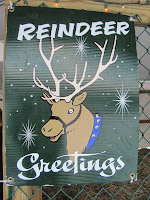 ..But they serve a mean Irish coffee too.
Meanwhile, more snow's been falling and everything's looking pretty again. 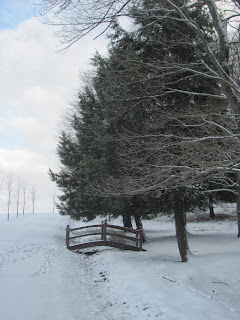