The Pleasures of Living in Snow 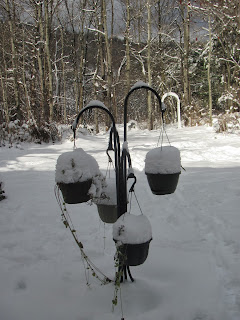 This is what things looked like at Thanksgiving and it hasn't changed. We haven't had this much snow in November and December for years.  Since Western New Yorkers talk about the weather even more than Brits, it was a vibrant topic of conversation at my Book Club. Do we like living in snow? The consensus was a resounding no. "I liked the novelty; I don't like the reality", said one gal who, like me, had come from eslewhere, in her case, North Carolina. Then things got a bit more upbeat - like Statler and Waldorf, the two grumpy old men in the Muppets, people started to look at the positive side, "It is like living in a Christmas card", ventured one optimist.
The first time I visited hubby-to-be on his home patch, I thought I'd died and gone to heaven. It was January and the Christmas decorations were still up, snow coated the trees, deer scampered along the snowy roadside. We went ski-ing and drank hot chocolate and sat by a log fire. I thought he'd laid on on all this wondrous whiteness special-like.  And when the sun comes out I still get a bit of that feeling. What I do not like is the dirt and the slush and the icy roads and grimy cars covered in salt and dropping my beautiful leather gloves in the garage and having them land straight smack in the middle of a pile of filthy, melting snow soup that's fallen off the car. And lie there unnoticed until they're saturated, slimy and beyond hope. It wears you down after a while and its only December.  Yet I hear there's a thaw ahead, just in time to spoil our white Christmas, so I'm off to try the ski slopes in case it's my last chance.
Posted by Alenka at 9:07 AM