Dateline London. Non-football fans look away now.
Having suffered through Man United's ignominious defeat to Newcastle on saturday, the less said about which the better, my friend and I rushed to Piccadilly Station to get on the first available train home to London from the Theatre of Nightmares. It had been cancelled. So had the next one. And the next. It transpired some poor soul had been run over at Watford Junction, the knock-on effects of which were gargantuan.
After an hour of staring at a static departures board, we repaired to a nearby bar to drown our sorrows. By the time we returned, we were sure the trains would be running again.  Not so. Well, that's not quite right. One was. And everyone wanted to get on it. The train was packed, not just with Man United fans but with Liverpool fans, who'd been shunted to Manchester, as no trains were running from Liverpool either. Normally that would be a perilously toxic mix* but in this case, the Liverpool fans proved gentlemanly. Well they could afford to be, since they had won and we had lost.  We had found seats but they had to stand. "Sorry" said my friend "but at least we've got something from today".
"No worries," crowed the Liverpool fan,   "We'd have let you have our seats in any case."
Then, at Stoke-on-Trent, to complicate things further, some Chelsea fans got on, disgruntled and slightly inebriated, as they had lost too.  The toxic mix could have exploded, if,  in a "love your enemy" gesture of  Mandela-like proportions, the Liverpool fans hadn't argued our case against the Chelsea fans, who insisted we were sitting in their reserved seats, "Leave the ladies alone, mate. They've suffered enough."
Upon which, the young man sitting next to my friend, offered one of the Chelsea fans his seat. He also could afford to be generous. He was probably still floating in an unexpected daze of happiness and bonhomie.
Everyone ended up agreeing on one thing - England's dire draw for next year's World Cup ("Men's World Soccer Championships" to my American friends, who probably can't understand.what the fuss is about. Though the US had a pretty dismal draw too.)  As a certain British tabloid put it : 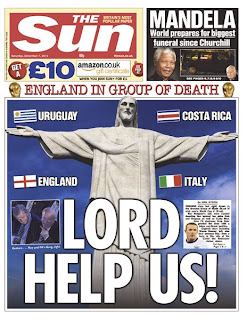 *Memo to American readers: there is no loathing greater than that of the Liverpool fan for the Manchester United fan (and vice versa).
Posted by Alenka at 12:44 PM