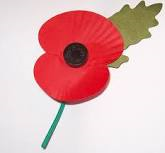 Means nothing to Americans. I remember some girl saying to hubby and me "How cute! You and your husband are both wearing matching red flowers!"  They do have Veterans' Day on 11/11 but that's something different. It celebrates the living Veterans as well as the dead. But I still bring out my British poppy (I got a friend to send us a couple) which is looking the worse for wear but better than nothing. Hubby has one from Canada, which is sort of stiff and velvetty but at least they have them there.

Americans do sell smaller paper poppies for Memorial Day, in May but they're very hard indeed to come by - although we did find someone selling them in Dunkin Donuts and bought up a bunch.
Incidentally, the Fall of the Berlin Wall (25 years - can't believe it! Oh those heady days of '89...) also apparently means little to some Americans. I overheard a quiz on the radio when I was at the dentist. "The Berlin Wall fell 25 years ago. Now, which country was it in? Was it Poland? Czechoslovakia? ... OK they did offer East Germany as one of the options. I didn't wait around to see if anyone got it right.
Posted by Alenka at 8:34 AM