Road Trip: Too Late to Mind the Gap

On again through West Virginia and some more spectacularly scenic roads. 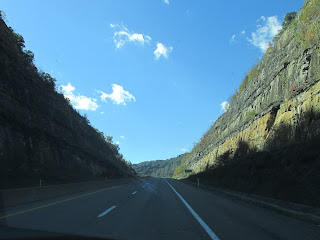 Winding through the mountains 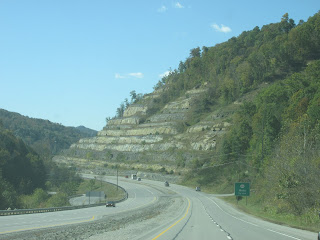 At one point we took a detour off the main road and suddenly we were in a narrow, winding valley of little houses, some little more than shacks, interespersed with rusty trailers, some solid brick or nice white clapboard. One had a neat little gazebo outside. A brown rocky stream ran through the middle. It must be a terrible place in a flood.  We just managed to miss two strange-looking dogs wandering in the road. It all seemed somehow self-contained and cut off from the world. Then we were back to more familiar country - a modern elementary school, signs to a conference centre and a farmers' market, a big Walmart plaza under towering rocks.  For some time we meandered along the West Virginia/Kentucky border. A sign said "Welcome to Pike County, Kentucky, Home of the Hatfield and McCoy Feud". But the place where we stopped for coffee and the most rubbery omelette I've ever eaten was still in West Virginia. (they were out of everything else we asked for, including sausages and skimmed milk. Sister-in-law tried her luck with a biscuit - like a scone on speed - swimming in gloopy white sausage gravy (sic). I didn't dare ask how it was.  A lady sitting by the door, yelled, "Don't want to be nosy but where are you ladies from?" We were noncommital but found it hard to extricate ourselves. As we exited with a smile, she was still calling out, "I don't want to be nosy..but". At times like these I feel very British. "Madam, you are being nosy." I found it very hard to understand the accents too, as they probably did mine.
Then we were in Kentucky, with more fabulous rugged gorges.  The road led straight over Pine Mountain. 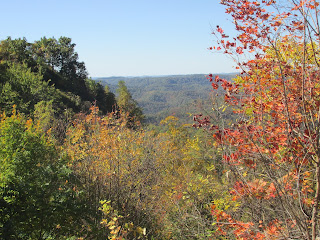 With spine-tingling views from the top. 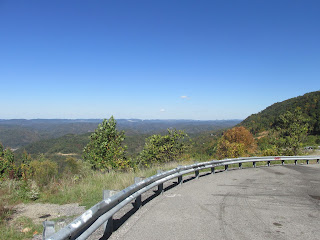 I always find it extraordinary, even in the eastern part of America, to see so much uninhabited near-wilderness. 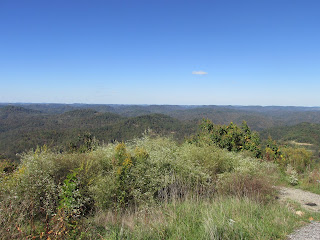 There was probably a reason why the road was called the Kingdom Come Parkway.  Driving under more mine-workings here. 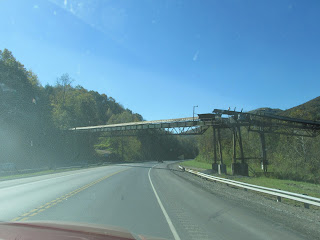 But then a big disappointment. I'd hoped we could drive through the Cumberland Gap, of pioneer fame. 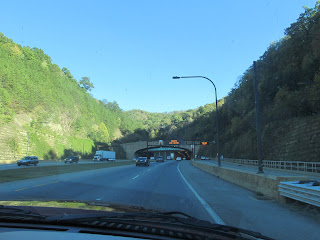 But, as the nice man working in the Visitor Centre (who happened to be English and originally from Northampton) told us, we were 19 years too late. A tunnel was built to replace the old road through the Gap, which has reverted to a pioneer-style path. You can still walk though it but sadly it was getting late and we needed to press on. 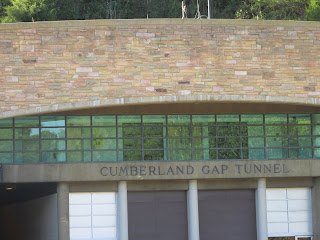 Another time, maybe, which is what we always say.