It was a surprise to find out that western Florida is one hour behind the rest. Travelling through time zones is an interesting feature of living in America and one you never get to experience if you stay in Britain but I hadn't driven through one before. You'd think there'd be a big sign but there wasn't. You also wonder what would happen to built-up areas, part of which were in one time zone and part in the area. Apparently in that case people can choose which one to be in. Perhaps they take a vote. We just resorted to checking to see when our phones switched. The wonders of new technology.
And old. Hubby tells me this Roller spotted in a car park en route might be some sort of American hybrid version. The side panels look wrong, he says authoritatively. 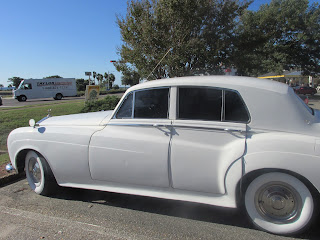 Up and over one of those spectacular causeway-bridges. This was on the way to somewhere called Gulf Breeze. We were definitely in Florida. 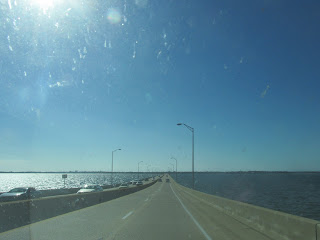 In the village of Fort Walton Beach 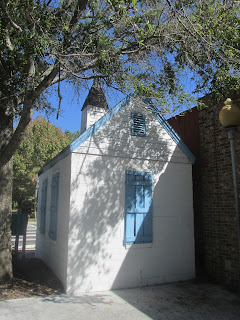 Was this sweet little old chapel. 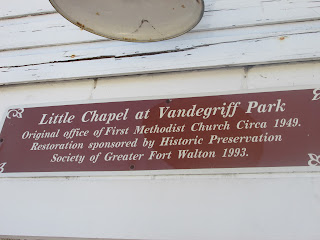 There was also a coffee shop - one of those swanky roasting places. It had an interesting array of customers, young lads in camouflage presumably from one of the local military bases and an elderly fisherman who said he just wanted "plain coffee, the sort you got before the yuppies ruined everything."
Then it was on along the coast road, past sand dunes and gateways to long drives, leading, I expect to desirable houses on the beach, live oaks, some arching over the road, some shading a little cemetery. Then through Destin, where we spied the most exquisite jewel of an art deco apartment block, perfect for the seaside but sadly no chance to get a picture. It was relatively undeveloped, with genuine fishing villages and houses on stilts to withstand hurricanes and tidal surges.
"Undeveloped", however would not apply to Panama City. 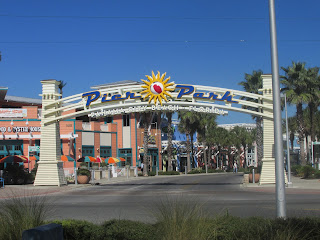 A sort of Blackpool-with-palm trees, notorious for rowdy students on "spring break". Fortunately it wasn't spring. 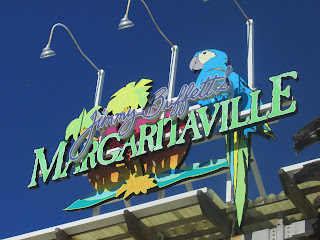 We looked for a likely place for lunch. Hook'd was at least on the beach 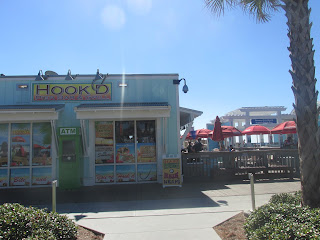 And had nice views. 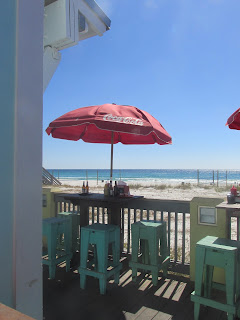 We'd reconciled ourselves to a so-so meal but were pleasantly surprised. It was the best fish-and-chips I'd had since leaving England.
To be continued.
Posted by Alenka at 12:47 PM