Road Trip: A Shrine and a Castle

Aiming for Birmingham, Alabama, we looked in on the Shrine of the Most Blessed Sacrament in Hanceville, founded by Mother Angelica, a feisty Catholic nun, who also started the Eternal World Television Network. 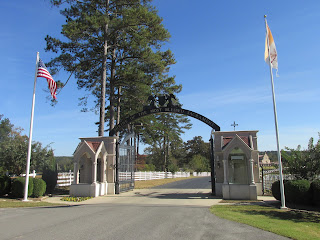 There were a few swanky-looking houses before you got to the shrine proper. Perhaps the beginnings of a "themed community." Clearly they weren't going to put up with any nonsense. 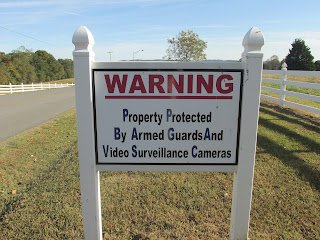 The first thing you see is some fancy white fencing - it reminded me of horse farms, as Americans call studs, in Lexington, Kentucky and such. And sure enough.. not exactly thoroughbreds but a couple of nice looking draft horses came over to say hello. 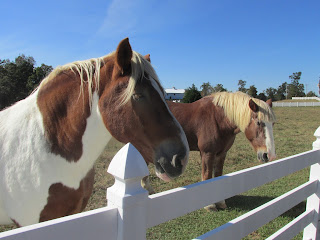 From the outside, the shrine church was beautiful - simple and Italianate in style 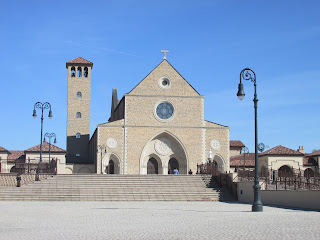 Fronted by an enormous courtyard and cloisters. We were there at a quiet time - it must cater for large groups of pilgrims. 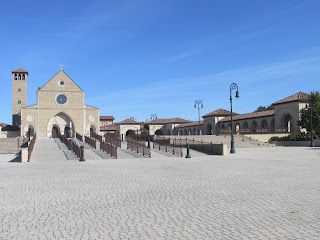 No photographs were allowed inside the church - which was a dazzling feast of gold-and-white, the Blessed Sacrament exposed on the altar in a giant monstrance. Very fittingly, awe and silence reigned. It all looked almost too new - which of course it was. The European in me likes slightly faded old churches and shrines steeped in history but, let's face it - even those were new once and perhaps looked like this one. 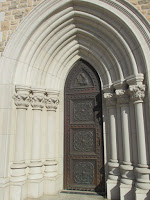 At the door was an impressive dress code, rather more draconian than I'm used to in Europe. The nuns at my school would have been transported with delight if we showed up in skirts like that. Two inches above was the general rule, as I remember and even that was the triumph of hope over experience. (I've noticed American Catholic Mass-goers tend to fall into two sartorial camps - the shorts-and-tank-tops brigade and the prim, long skirts types. There's little of a happy medium. Americans, with their typical enthusiasm, don't do things by halves.) Having said that, a lot of churches could certainly use a slightly modified version. 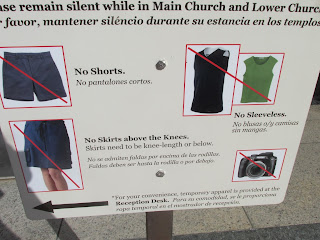 The whole was a splendid sight and one in the eye for people who design modern churches to look like gasworks, almost embarrassed that they might appear a bit too religious. This place isn't embarrassed. Not a bit.
But I have to say there was a little of the "only in America" about it.  Piped music played in this  chapel with a lifesize crib scene, Baby Jesus looking a little old for the part and laughing merrily. 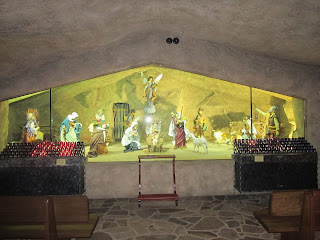 Perhaps He knew we were about to cross the courtyard to.... 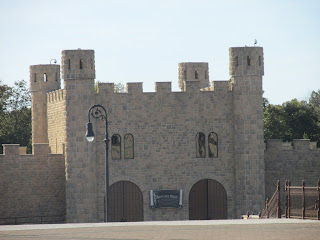 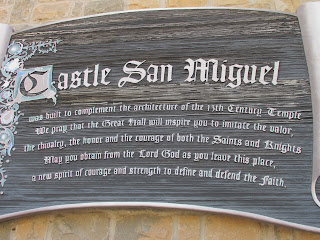 There was a Great Hall 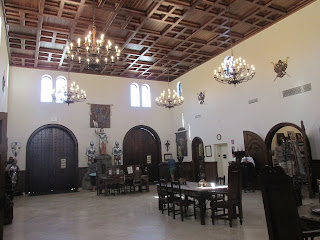 Tapestries and knights in armour 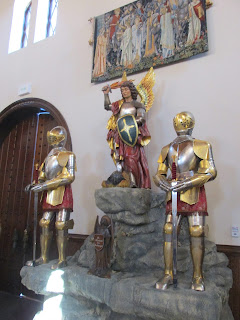 Some positioned in unexpected places.. 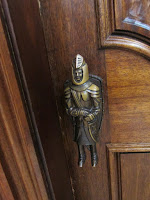 It was certainly the most sumptuous restroom, as they call it here, that I'd visited for a long long time. 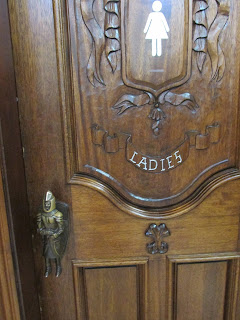 And came with appropriate sentiments 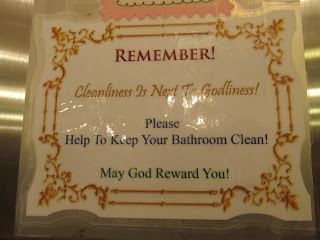 Once rested, it was time to hit the castle's apparent main purpose, the shop, with its huge array of books, statues, medals, rosaries and holy cards. Rather nobly - but again rather oddly, compared to most other such places I've been to, the shop doesn't open on Sundays - when, presumably, most of the potential customers are there. But I'm sure they know what they're doing.
Posted by Alenka at 8:19 PM