It was Sunday evening when we reached our first Florida destination, Pensacola, an interesting city with an interesting history and to go with that, an interesting Historic District where we were pretty sure we would find an interesting restaurant. So, rather by luck than judgement, we found an interesting little hotel called the Sole Inn very much in the interesting heart of things. "Just walk a couple of blocks", advised the friendly receptionist - "plenty of places there." So we walked and walked and found most places closed except for a succession of loud "Irish" pubs and bars which weren't particularly interesting to us, though they might have been to all the soldiers and sailors, Pensacola being in the heart of military base country. In short, we were getting desperate.  We fully expected that we'd have to find the nearest garage and buy day-old sandwiches and beer to take back to the hotel which normally happens when we hit a patch of restaurant-hunting bad luck. There was only the harbour left to try. Now usually the last place on earth for good, as opposed to touristy, restaurants is a Florida yachting marina.  But any port in a storm, as they say and we found ourselves at an eatery called Jaco's that really wasn't half bad. In fact it was everything you could possibly want - good food, tables outside overlooking boats and the sunset. Except that Pensacola being in the north of Florida, it was just a mite chilly. 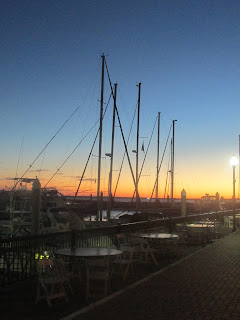 So we chomped on cold cucumber soup and grouper and grits and slurped mojitos and Irish coffee and chatted to a charming young waiter who said he was going to vote for Bernie Sanders because he "seemed the most genuine" candidate but admitted he hadn't really looked at any of the others. Sister-in-law, who comes from Vermont, suggested he might like to do so. Afterwards we took in what appeared to be a huge cargo ship on the other side of the harbour. 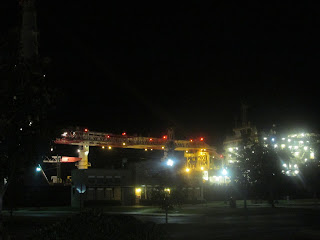 And walking back to the hotel, wondered if we'd been a bit heavy on the mojitos and Irish coffee. 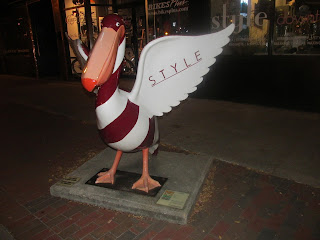