To most people, Selma, Alabama, says one thing - the big 1965 Civil Rights marches, led by Martin Luther King, especially the brutal suppression of the first one, on the Edmund Pettus Bridge, America's Bloody Sunday. I had always wanted to see this poignantly historic place.  It proved to have some lovely old buildings. This is Our Lady Queen of Peace Catholic Church. 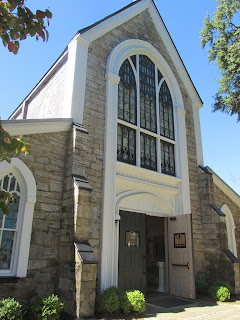 A choir was practising for the Spanish Mass. 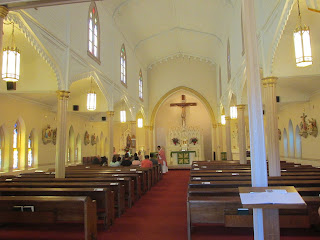 It had a rather nice font. 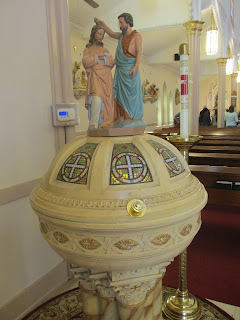 And a splendid parish hall. 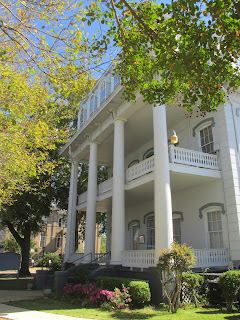 But it wasn't always called Our Lady Queen of Peace. A leaflet on the church's history made sobering reading.  The "white" parish, Assumption and the "black" parish, St Elizabeth's (below as it looks now) were only integrated in 1971, though apparently the rules had been bent before that. As the leaflet said,  "Sgt James O. Burk, a white member of Assumption parish was beaten up in 1964 for publicly defending the parish's policy of allowing blacks to attend services".  And so many of St Elizabeth's parishioners were arrested for demonstrating in favour of voting rights that a Catholic paper called it "A parish of jailbirds". 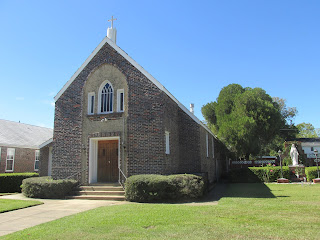 Subsequently the Archbishop requested that the St Elizabeth's priest, Father Ouellet, be removed from Alabama. "In 1965, the white people of Selma were scandalised by Ouellet's presence and the black people of Selma were scandalised by his removal".  Many Catholic and other churches and their members played a heroic part in the Civil Rights struggle - but this was an insight into just how complicated things were.  A foreigner passing through couldn't hope to understand. And in some ways, I felt like an intruder in someone else's painful memories.
Below is Tabernacle Baptist Church - according to the historical marker outside, some of whose members invited Martin Luther King to Selma in 1964, in contravention of an injunction "against people meeting in public to discuss breaking the law". 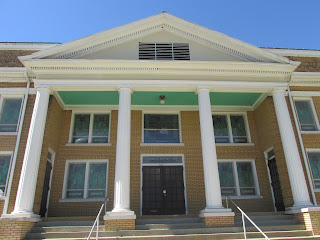 Selma on a Sunday was very quiet - practically deserted. It seemed almost a time-warp. 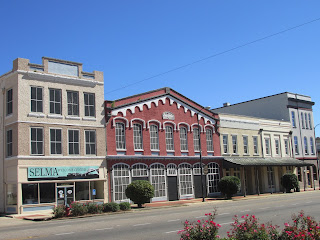 Especially the area around the infamous bridge 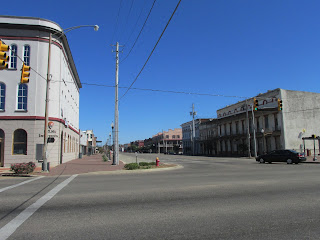 For some reason, among the attractive but bleak old buildings 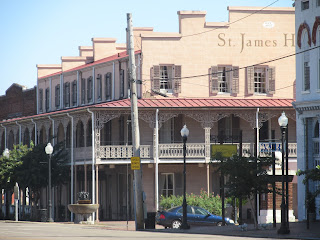 I expected to see some signs of a tourist industry. This was America, after all.  But it was more like a ghost town - or perhaps just a sleepy Sunday one. 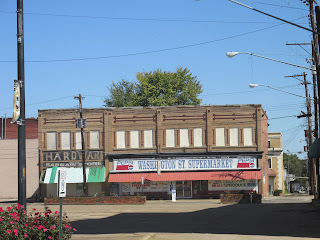 Perhaps the memories are still too fresh. Though the Edmund Pettus Bridge signified triumph as well as tragedy. We felt humbled to be able to drive over it, taking the same route - Route 80 - that the marchers took to Montgomery when they were finally allowed on their way. 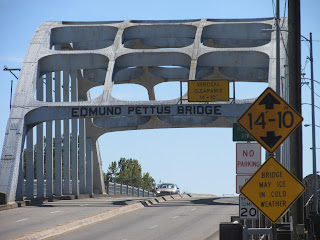 A little way along the road 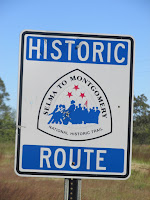 was an "Interpretative Center", marking the site of a former tent city of evicted black people but it was closed on Sundays. The grounds were peaceful and pleasant though. 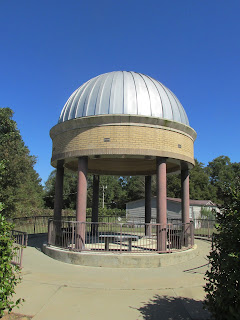 And tiny flowers bloomed in the grass. 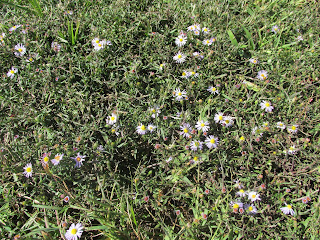 We heard an anecdote from the receptionist at the hotel we'd stayed in the previous night, on the outskirts of Birmingham. (BirmingHAM, Alabama, that is.) Her father has been at Selma High School when it was first integrated.  Smelling trouble, the media circus descended on the school but the principal wouldn't let them near it. "I'll call you if there's any trouble", he said firmly. A few months later, the call came and got the predictable excited reactions, "Trouble, you've got trouble?"
"Sure there's been some trouble", said the Principal.
"What happened?" squawked the ecstatic hacks, scrambling to get their equipment together.
"There was a fight," and he paused and chuckled, "between two white boys."
"My daddy loves to tell that story!" said the receptionist.

Coming up: Dazzling Montgomery
Posted by Alenka at 7:54 PM