Sister-in-law and I have, like the notable Founding Father, overnighted in Berkeley Springs, West Virginia. It is, of course, pronounced BURKley, this being America.  Apparently the great man slept in our hotel, the charming Country Inn, which we happened on quite by chance, having decided we'd done with driving for the day. Technically, he didn't really sleep here, since it was only built in the 1930s but in an earlier incarnation on the same spot. But he had a bath in the State Park next door. So we were told. 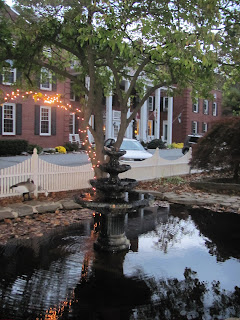 This is a spa town and in fact used to be called Bath. Seemingly the Romans got here too, since there's a "Roman Bath".  Amazing, that. It also has a castle, in the usual way of Americans, built by a rich chap for his wife. Are you listening, hubby?
Our hotel had an intriguing notice in the bedroom:
"Don't be alarmed if you find a "critter" or two in your room. They are gray-brown marmorated "stink bugs" that come indoors due to cooler weather. While they are harmless to humans, they can be annoying and we apologize should they cause you concern.
To remove them, the suggest picking them up with tissue and flushing them down the toilet. If they are a further problem, please contact the Front Desk and we will send someone to remove them for you. Please refrain from crushing the bugs as they emit a smelly odor.
Please enjoy your stay."
Thanks, we will.
Posted by Alenka at 7:52 AM