You might be wondering about the turkeys. Here's the tale.......

We got back from our holiday to find we had squatters. There’s always a risk leaving your house unattended and the squatters, a family of eight, were obviously clever enough to work out that we weren't there. Fortunately, the gang hadn’t  found a way into the house, though they had made themselves comfortable on the patio. I spotted them there the evening we arrived back, nonchalantly enjoying their picnic. The large, fat mother had attitude. She eyed me up brazenly and nailed me down as a soft touch. Then she took her time rounding up the children and heading off to the stream behind our house, where, presumably, they were camping out.

I thought they wouldn’t dare return, knowing we were back but I was wrong. Two mornings later, there they were again and this time they weren’t just enjoying our patio, they were using our garden furniture, the seven, yes, seven, kids dozing and sunbathing on the sunlounger without so much as a by-your-leave, climbing all over my yellow cushions, joshing with each other, then playing an extreme sports game where they jumped off it one by one and crash-landed on the bricks. While a couple of them came to the back door and stared rudely in, obviously casing the joint, the others sauntered off to play hide-and-seek among the rhododendrons.
. This went on for a couple of weeks. Then things went too far. One fateful day, deciding they wanted dessert, the mother suddenly marched them all off in the direction of my few, puny blueberry bushes. Their heads shot out like Medusa's snakes and in a few dreadful seconds, every last blueberry had gone. 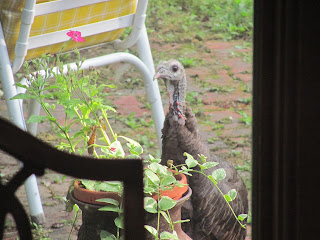 Our felons were wild turkeys. Huge, stately, glossy brown birds, nothing like their pasty farmyard counterparts, they are supposed to be very shy. They have remarkable hearing and even more remarkable eyesight, which makes them tricky to hunt, should you be so inclined. They don’t like to hang out with humans. But, it appears, even the turkeys have no respect for us. “When turkeys start using the lawn furniture”, a friend observed,  “You just know you’re not master in your own domain.”
Posted by Alenka at 7:22 AM